I never knew what a Critic’s opinion had to do with me or why that should change my opinion. My music preference changes daily. I grew up on Deicide and Pantera, which quickly molded its way into Primus and Rush. By high school I was inspired by Toad the Wet Sprocket which grew into Martin Sexton, Willy Porter and Classical Guitar in college. Now some of my favorite music is made by my closest  friends.

At any given time, I may be in the mood for funk, rock, bluegrass, jazz or songwriters. I have never let anyone’s opinion change the way music makes me feel. And when I’ve read a bad review, all I’ve ever wanted to do was reach out to that musician and let them know that no one cares what that Critic has to say.

Seth Godin has a blog that I follow daily. I had to share this as I think every musician should read this and find confidence in the audience that appreciates their talents. Enjoy and please share with your peeps – Dave Tamkin 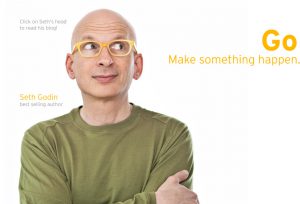 What’s the point of his review, then? Clearly the audience, discerning in their own right, disagreed. Do mainstream critics exist to tell us what to like, to warn us off from the not-so-good, or are they there to punish those that would dare to make a piece of work that doesn’t match the critic’s view of the world? Perhaps the critic is saying, “people like me will have an opinion like this,” but of course, there just aren’t that many people like him.

For me, the opinion of any single critic is becoming less and less meaningful as I choose what to view or engage with. And the aggregate opinion of masses of anonymous critics merely tells me that the product or content is (or isn’t) mass-friendly. I’m far more moved by the insistent recommendation of a credible, raving fan than I am the snide whispering of some people who just didn’t get it.And yet we not only read them, but we believe them. Worse, we judge ourselves, contrasting our feelings with their words. Worse still, we sometimes think we hear the feared critic’s voice before we even ship our work out the door…

The math is simple: no matter how big a critic’s platform, what moves markets are conversations. And we are far more likely to have conversations about something we’re raving about than something we didn’t like (because when we don’t like it, our friends never experience it and the conversation dies). The win, then, is creating raves, not avoiding pans.

Every single book I’ve written has gotten at least a few one star reviews on Amazon. Every one. The lowest possible rating, the rating of, “don’t bother reading this, in fact it never should have been written.” Not just me, of course. Far better writers, writers like Fitzgerald, Orwell and Kincaid have gotten even more one-star reviews on their books than I can ever hope to.

No one has ever built a statue to a critic, it’s true. On the other hand, it’s only the people with statues that get pooped on by birds flying by.

Godin believes that the end of the “TV-Industrial complex” means that marketers no longer have the power to command the attention of anyone they choose, whenever they choose. Second, in a marketplace in which consumers have more power, he thinks marketers must show more respect; this means no spam, no deceit and a bias for keeping promises. Finally, Godin asserts that the only way to spread the word about an idea is for that idea to earn the buzz by being remarkable. Godin refers to those who spread these ideas as “Sneezers”, and to the spreading idea as an “IdeaVirus.” He calls a remarkable product or service a purple cow.

Advertisements on television and radio are classified as ‘interruption marketing’ which interrupt the customer while they are doing something of their preference. Godin popularized the concept of “permission marketing” where the business provides something “anticipated, personal, and relevant”…. more at Wikipedia