Home Music On the road with Tom Mangione
Music 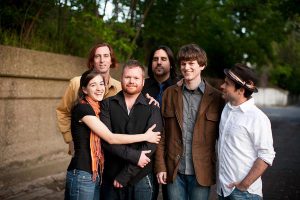 It’s a funny thing to have six people in a car, day after day, heading to a new town and to another show. What a weird existence! Often we are in that car for hours on end, traveling cursively through space and time, going nowhere in the end because we always end up in the same place we started – home. To pass the time on our journeys, we don’t all talk as a group (mostly). Instead, we have fallen into our own solitary habits. I would love it if someone could travel with us for a time, as a passive observer, noticing our activities while we travel the endless road. That person will see the same things over and again: Patrick is reading a book (a thousand-page brick of a book, nonetheless), Kristina and Mike are sleeping (often times for the entirety of the trip), John is driving while musing on the topics of politics, philosophy, and music, and at the same time Nez is navigating while playing the part of devil’s advocate, keeping John in check and his feet on the ground (the two often remind me of Socrates and his students discussing the same eternal topics in the agoras of Athens). As for me, you will usually find me quietly looking out the window, taking in the sights and deep inside the cavities of my mind … pondering, ruminating, and talking to myself (in my head, of course). If I may, I’d like to share one of my thoughts on the topic of music. I hope it is not overly tedious. Please bear with me.

The etymology of the word “music” comes from the Greek for “muse” (i.e. Μοῦσα – Mousa). You can see the connection, and interestingly, the same root also flowered into the word “museum,” the treasure trove of the arts. The muse – sometimes evoked in plural form but essentially one entity – was the goddesses of inspiration and the purveyor, through the vehicle of the artist, of art itself. Throughout ancient times the muse was evoked before a recitation. Homer, for example, began his great works by calling on the muse to inspire him and to lift his words heavenward. But what’s more, music (along with the lyric) was seen as the highest form of art: that which can provide momentary manifestation of the ineffable; that which can make the inaudible, audible – the invisible, visible, however fleeting. Music, of course, does not take physical shape. It is the only art form that is invisible … not seen but heard and internalized. It is an inhalation and exaltation.

But alas, back to the specifics of music. I remember reading an interview with Bjork, the Icelandic singer, almost 15 years ago. It was fascinating. She mentioned that she continues to write song after song because she is forever in search of the perfect song … an elusive pursuit perhaps. She will never stop, she said. I identified with this. I think the same can be said of all musicians and songwriters. Our songs are never perfect; they seem unable to communicate exactly what we are feeling. We try. We fail. But we get back on the proverbial horse. The question is: is this search for perfection possible in an imperfect world? For some sort of answer, I refer back to ancient Greece, to the reticent poet and artist, Plato. Plato argued that not even a true circle is possible in this world. Though one might try, the imperfections inherent in all surfaces prohibit such a feat. Think of a piece of paper and all is crests and troughs. You might try to make a circle, but in some way, however small, it is not perfect. It is a distortion. To be sure, a perfect circle exists, yet only in another world – the eternal realm of forms. Yet, at the same time, we have in our head an idea of the form, the thing in itself, even though it is not tenable in our world. Thus, worldly circles only inspire. They stand in as an understudy of the thing in itself. Our circles here on Earth, for example, partake in the idea of “circleness.” They are close replicas but not the thing in itself. As such, Bjork embarks on a noble pursuit chasing the perfect song. To do this, she chases the very notion of perfection, that is, perfection in itself. While we know this is impossible, the pursuit itself may partake of remarkable features on their own. She fails, as all creators and artists do, but the search makes manifest things like faith, love, and hope – however fleeting. At best the audience connects with the emotions conveyed and tentatively grasps the artist’s intention. Yet, it is not the perfect song. Get back on that horse. So, the muse is not obtainable in this world. She is there only to inspire, to breath in and inflame. There are good songs and there are better songs. She holds her hand out when coaxed by the latter, a more-perfect melody. Our goal is to grasp her. As a creator myself I also chase the perfect song … and the muse.

At last, I await to see her, to greet her where she is. When I do find the muse, a pursuit unto death, I hope she will sing for me the perfect song. I will then get off the horse and pause in my tracks.