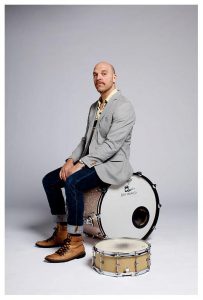 Born 1970 in Minneapolis MN, Dave King studied piano and drums as a young person. He moved out east for a moment in 1989 when NYC still had barrel fires burning in lots that now house the American Apparel flagship store next to a place you can get a $7.00 espresso.

After a stint in L.A. until the 1994 earth quake, Dave King moved back to Minneapolis and co-founded the bands Happy Apple, Love-Cars, Halloween, Alaska and joined 12Rods.

In 2000 co founded The Bad Plus in NYC and has performed music in 75 countries and 6 continents and appeared on over 50 recordings.

In addition he has also worked extensively with The Mark Morris Dance Group and with acclaimed fashion designer Isaac Mizrahi on his fashion week music and t.v. show music. Dave King has also recorded and composed for film including two films for animated film maker Tom Shroeder and 6 seconds of one of my drum beats is in the film “The Hot Chick” starring SNL icon Rob Schneider believe it or not. 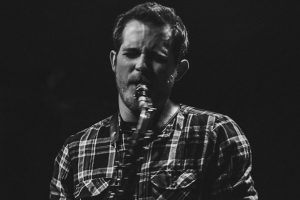 Chris Weller is a tenor saxophonist and composer living in Forest Park, IL. He attended Berklee College of Music on scholarship from 2007-2010 where he received his bachelors degree in saxophone performance. During that time, Weller performed in jazz groups across the nation. Since college, he has performed internationally as a bandleader, established a reputable private teaching studio, and hosted clinics in the U.S. and abroad on elementary, high school, and college levels.

You can also find Chris Weller with his band the Hanging Hearts They are a free-spirited Chicago-based trio. Described by European audiences as “hammering the walls between genres,” their music bridges the gap between jazz, rock, and experimental music. The band features Chris Weller on tenor saxophone, Cole DeGenova on keyboards, and Devin Drobka on drums.

“His application of circular breathing technique to his tenor and humongous bass instruments already gave his playing a mantric quality, made more emphatic by his forward and backward swaying. It’s Weller’s battery of effects pedals and looping devices that put him into an otherworldly stratum, however.”

Can you give us a little history of how this friendship and music project started?

DK: I was asked by Chris to produce a record of his (Hanging Hearts). Then we started recently thinking of playing together.

CW: I’ve been a long time fan of Dave’s drumming and various projects (Happy Apple, The Bad Plus, Halloween Alaska, Rational Funk, etc…). After we did the Hanging Hearts record, I eventually started booking tours for some of Dave’s projects (another dream come true) through Big Fish Booking Company, and this duo tour sort of manifested naturally at the right time.

Dave King – I was first introduced to you through your YouTube channel: Rational Funk. It’s clear on daveking.net that you keep yourself busy with a variety of projects and always have. How would you describe the diversity in your creative outlets and how do you feel it’s played a role in helping you become a business savvy musician?

DK: Well I’m not a business savvy musician that’s for sure. I am just interested in making things as broad as that sounds. I don’t think about the diversity of ideas I just think about trying to produce good work in any way I can.

Chris Weller – You have a few projects of your own. From Hanging Hearts to your solo sax project, how does your experience to express yourself change with the variety of cast members you surround yourself with?

CW: The projects I’m involved in all leave room for people to put their personal touch on things. What I express might change depending on the project’s conditions and the song but the freedom of expression is always there. There’s a visceral connection to different dynamic/intensity levels that I enjoy. Also, I mostly play music with good friends, which adds another layer of connection to the music and what I am/we are able to express.

I’ve heard that both of you are not only spending this tour playing clubs and theaters but also teaching and doing clinics along the way. Can you run us through your most busy day so far on this tour?

DK: Well we have had a few days of traveling early to one town and teaching then driving 4 more hours to another town to play a concert. That’s unusual in my experience but it’s got us staying focused!

CW: Almost as many clinics were booked as club gigs for our tour which was pretty intense. There were a couple days that began with us driving a few hours early in the morning to a city, doing a clinic at a University, then driving another few hours to a different city to play a gig…which was sometimes followed by a late night hang depending on which friends we had in the city.

Can each of you name two musicians that you are listening to now that you think more people should listen to?

CW: Pharoah Sanders and Colin Stetson. YES, I know…they are both saxophonists. I do listen to other music believe it or not. They just are righteous af (!).

–Get more sleep and don’t be so stressed traveling and keep to myself?

–Keep working hard through the growing pains of building something. Turtle wins the race.

Are there any lessons learned you would like to share with our up and coming musicians? Practice loose, play hard? Sleep with your instrument? Honor your relationships? Always get a contract?

CW: It’s music, enjoy it. Use your imagination, play from a place of joy and discovery. If you need direction, figure out what you want to do and go after it. Who do you want to play with? Do you want to focus on developing a specific project(s) or do you prefer to play constantly with a variety of bands, jobbing gigs, etc…or both?