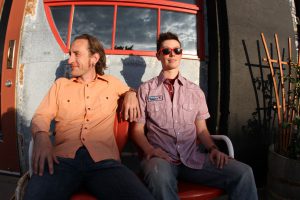 We recently sat down with Amy Shelley of High Fiction to talk with her about their unusual Kickstarter campaign, their most recent single featuring Matt Berninger of The National, and their upcoming debut album.  High Fiction is an indie rock duo based in Denver, Colorado, consisting of Amy Shelley and Gary Grundei.  Both artists draw from their eclectic backgrounds as professional musicians; blending rock, jazz, funk, Brazilian, musical theater, and classical music to create pop tunes with distinctive shape, layers, and compelling storytelling.  Be sure to visit their Kickstarter campaign, download their new single, and then keep an eye out this summer for their full album release.

You have, shall we say, a rather unusual Kickstarter campaign that has been gaining attention beyond your established fans…  how did you come up with it?

Well, people may want to take 3 minutes to go to our Kickstarter page and take a look at our video: (https://www.kickstarter.com/projects/30415322/high-fiction-buys-a-coffee-for-dave)

We’ve both been involved in several crowdsource fundraising ventures in the past, and we decided that we really wanted to have fun with this one.  We’ve experienced that element of asking for funds that feels stale and/or awkward, so we wanted to find ways of avoiding that.  I think the real lightbulb moment came as we were joking around and talking about the commercials from the 80’s/90’s and the idea that one person can make a lot of change in the world, “for just the price of a cup of coffee.”  It’s true, though…  and when I said, “for just the price of a cup of coffee…  you could provide Dave with a cup of coffee,” to Gary, he started giggling.  From there we just brainstormed and took note of anything that really made us laugh.  We are fortunate to be surrounded by a community of fun, engaging, creative people.  We took our idea, made a storyline for the video, and then enlisted our friends and colleagues to film and edit the video.  We also watched a lot of crowdsourcing videos and made note of what we liked and what we weren’t so fond of and kept that in mind as we moved forward.

Speaking of friends and colleagues, your upcoming record release features some pretty impressive names, including Matt Berninger of The National, Denver jazz trumpet legend Ron Miles, and prepared guitar pioneer Janet Feder.  How were you able to bring such high caliber guests to your first record?

We’re so glad you asked!  We feel so very fortunate for our lives to have crossed paths with these beautiful and talented beings.  We have both worked with Janet Feder in various ways, I have played gigs with Ron, and Gary actually grew up with Matt!  I think, as a band, High Fiction really values community – both the community that we’ve individually built being decades-long professional musicians in our field, and also the community that we have been able to build and connect among our artist friends and among our audiences.  Music really has a way of bringing people together, so these colleagues that we play with, over time, really end up becoming friends and feeling like family.  They’ve been very generous in lending their talents and their names to our project.  It’s a huge vote of confidence.

And how about a little background.  How did you two meet?  Who are some of the artists that have influenced your playing/sound?

We first played music together working on a totally crazy play called, “The Handler,” in Boulder in 2009.  The play was strange, but we immediately felt a strong connection in the way we played and the way we listened and respond to music in the moment.  A lot of the music for the play was set, but there was room within it for improvisation, and we both felt a strong “kindred spirit” connection in how we heard and played and interpreted the music.

We have both been influenced by a wide variety of music, including bands like The National, Bright Eyes, and Alt-J, and also a lot of jazz, classical, theater and a variety of other genres.  We listen to everything from experimental classical to hip-hop to classic rock and we are consistently introducing each other to new and different music.

We absolutely love your most recent track – we love the story and the layers you use, and to us, it sounds cinematic.  How would you describe to a new audience what you sound like?

Thank you so much!  The most flattering comparison we’ve heard so far is “The Flaming Lips mixed with The Beatles.”  We think that’s pretty intense (and humbling)!  We’ve also been compared to Ben Folds Five.  The songs we create are driven by lyrics that allow our fans to really immerse themselves into our songs, with twists and turns in the melody, harmony or the rhythm to keep our audiences engaged.  The best way to find out what we sound like it to listen to our new single, “The Young Men.”  It is a great representation of our sound and a sampling of what is to come on the album.  You can get the single by donating a minimum of $1 to the Kickstarter and then you can download single.  Of course, if you like the sound and the song, you can donate more.  We’ve got great Kickstarter swag like fan club membership, a whiskey date with the band, hoodies, t-shirts, stickers, and, of course, the full album.  Once it’s completed you’ll receive it prior to its public release.  If you donate at the level where we will already be mailing you something – you’ll get some additional bonuses along the way. 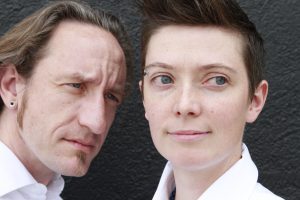 ve our audience with?

Thank you for asking questions and sharing our story!  We are very excited to get this album out into the world.  I recommend getting involved with our fundraiser and our band, and follow us for perks that later fans won’t have access to receiving.  And, if you like what you hear – let us know!  Comment on our Facebook page, send us an email, tell your friends, share our Kickstarter page, and all in all – just reach out to us!  We are building something big with our community of fans and friends.