The year had to be 2005. We were playing a large festival in Palatine, IL and our guitarist couldn’t make the gig. We called  Marc Walloch, a guy we only heard play at Roselle Music while testing out amplifiers. Marc not only played the show but did it without a rehearsal and nailed it.

You would have never known Marc was that young by listening to him play guitar. Fast forward to 2016 and he is not only making his own albums but touring with AWOLNATION. He is an accomplished songwriter/multi-instrumentalist with a burning love for people, community, and music. He currently resides in Los Angeles but hails from Chicago. 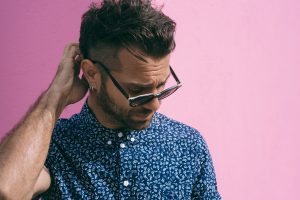 Recently, Marc has played guitar for Juliette Lewis, and has been composing music for his commercial music production team, The Kinsonic. He is also collaborating on co-writes, working as a session player on guitar and bass, and currently plays bass for multi platinum electronic rock band AWOLNATION. Walloch also plans to release his solo debut, Through The Seasons, under the moniker SPILL early 2016. You can hear his first single STRANGERS here.

Why do you play music?
It’s the only time I truly feel that I’m in sync with my path and my heart can beat slower.

Only knowing your songs and recording process from your work with Company of Thieves, how did you approach this album from a solo artist standpoint?
I knew that I didn’t want it to sound like a normal full band situation because that would’ve been disingenuous but I also didn’t want it to be just another sad singer songwriter acoustic folky thing either. I wanted to bring the songs to life in a fresh organic way. A lot of my gear was stolen for the second time while making this record so I had to use whatever was lying around each day. So that also forced me to create new ways to overcome the obstacles.

I would say the main focus was about the songs. The lyrical message and the sonic mood to support it as well as melody. I wanted to make songs that sounded very personal and be able to work if you sat down and played them on a piano or guitar. But I wanted to bring them to life while still maintaining that intimacy. When it came to guitars as textural layers, I wanted to make sure they were slightly different and unusual. I like that we are in a time where guitars aren’t really “cool” to a lot of people or used much in current pop production. To me, that’s an exciting challenge to bring the guitar back to life by using it differently. As far as what bands influenced me…I’m always influenced by so much but for this record it was important for me to figure out how to use my voice. I have a limited vocal range but so do a lot of my favorite singers. I like people who have more of a raw and honest character to their voice than a traditional singer. So I listened to a lot of Beck’s Sea Change to see how I can use my voice and how I could make it impactful with the surrounding elements in the production process. You can’t have big loud drum sounds and wide guitars and then have a mellow voice trying to sit on top of all that. This minimal approach is my favorite production style and I never got to execute it with Company of Thieves

What were some of the major benefits of expanding from Company of Theives.
I think I learned a lot about songwriting and production from years of experiences with Company of Thieves. I also had a clearer vision of the kind of music I needed to make to properly represent myself as a human and an artist. It also helps to have such a supportive group of people out there that are still interested in what I’m up to musically. I’m kind of in a place where I have nothing to lose.

Can you tell us more about your time with AWOLNAITION and how that came about?
Playing with AWOLNATION has been such a great experience. One of my old tour managers used to be one of AWOL’s sound guys and he mentioned they were looking for a new bassist. I just went in and jammed with them and we all clicked. It’s my dream to not only be able to constantly be playing music for a living but also not limit myself to only one musical outlet. I love playing guitar as much as I love playing bass as much as I love songwriting. I also like producing commercial music. I basically want to be as well rounded as I can so I can stay busy but also keep growing as a musician and as an artist.

When did you decide it was time to record this album?
Well, I wrote so much with Company of Thieves that by the time we broke up, I was heartbroken but didn’t want to wait around to find another singer that would fit the magical dynamic that I had with Genevieve. So, I had some songs that I was writing that I thought were pretty interesting so I just made demos of them and sung them myself. When I showed a demo of Oil and Water to my friend Scot Stewart he flipped out and instantly told me he really wanted to make a record with me. It was the first time I ever played anyone a song I wrote with me singing on it. I never thought my songs sounded great with my voice but the reaction I got from some people was overwhelming. I was going through a lot of big turning points in my life and needed to talk about them. So making this record was my outlet to focus on and express my gratitude in life while going through a dark time, instead of letting it get the best of me.

We follow you on Facebook, Instagram and Twitter information and look forward to your new website. How important is social media to you?
I think it depends on the person. Some people seem to have a great network of people around them and that always helps getting work. But having social media is sort of like updating your resume on a day to day basis. You can represent yourself and your work and show the world and through that connect with new potential friends, partners, fans, etc. The trick is to not abuse these benefits from social media. We all have a voice now and can spread negativity like a disease out there.

Who are you listening to these days?
I’ve been really loving the latest Unknown Mortal Orchestra record. Also, Bailiff is a local Chicago band that is one of my all time favorites. I’ve been digging a lot of Elvis lately too. Blake Mills is the best guitarist to ever play.

How do you plan on promoting this album as a indie artist? Step by step would be nice to share with the newbie musicians out there.
Well I’m still figuring that out. Haha. My plan is to team up with a PR company to help bring awareness to any already existing supporters and let people know there is a record I made to release. The first step is releasing a song and video to get people excited and hope they share it around social media and gain new followers. When blogs feature and premier songs it’s a nice jump start to get people hip to you and your upcoming record. This has been a fun project for me because it’s the first time I didn’t have a clear agenda attached to it. It’s been very slow and natural and just seeing what happens. This is my debut as a solo artist and songwriter. I hope it attracts people to my work and allows me to make more records and play some shows at some point too. In the mean time I just want to keep writing with other artists, playing guitar and bass on sessions and live, and making commercial music. I have so much music to make so I don’t want to feel limited.

But right now I am very excited to finally share this batch of songs that represents as very specific chapter in my life that is important to me. I am proud of it!

How To Easily Get A Lot More Music Gigs