Here’s a guest post from our friends over at ZingInstruments.com who are almost as obsessed about music promotion as we are! 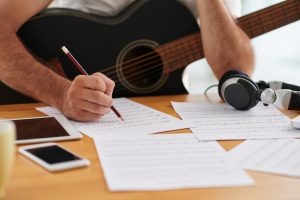 We all know somebody who just wants to be “all about the music, man.” but in a competitive world you don’t have the luxury anymore. At some point you’re going to have to decide on a marketing strategy to get your music out there, encourage your fans to buy your latest releases and reach a larger audience. If you’ve never done something like this before, it might seem like an impossible puzzle to crack, so we’re going to give you a helping hand by showing you 5 common marketing mistakes musicians make so you can avoid wasting your time by trying to do the same.

They think sharing on social media is enough

You can’t avoid social media. If you want to be successful you’re going to need a strong online presence, and that does include things like Facebook, snapchat, instagram and twitter. However, it’s important to remember that this is social media, not a marketing platform. Whilst there has been an effort to increase the reach of advertising efforts across all of these platforms by their respective developers, you have to understand that people don’t go onto these platforms to find new music (generally speaking), instead they come to connect with friends.

By all means, take advantage of these sites. But don’t rely on them entirely. There are other ways of promoting your music that are far less irritating than constantly spamming your soundcloud links.

They target the wrong audience

Do you take every opportunity to plug your latest album? I know you’re proud of all of the hard work that went into creating it, and you’re pretty sure this is your best effort yet, so why do people seem to lose interest so quickly? Is it really that bad?

Chances are it’s pretty good if you’ve put the effort in. The problem is that you’ll find it easy to forget that a lot of people simply won’t share your taste in music. If you’re at a gig of a band that is similar to your own, you’re talking to the right audience. The musicians and fans at such an event would be perfect to reach out to. However, if you’re in a death metal band and you start trying to convince your high school English teacher who’s obsessed with The Smiths that he should check out your new single, you might be barking up the wrong tree.

There’s nothing wrong with taking a chance, but this sort of scatter-shot approach saps your energy and makes you doubt whether you’re any good. Save it for the times when you’ve at least got an inkling that the people you’re talking to are going to be open to what you have to offer.

Do you have a music video for your single? If not, you’re missing out on a great opportunity. YouTube has launched video media into one of the most important types of content for any marketing plan.

You might be tempted to take umbrage with this, but the fact remains that it’s more interesting for most people to watch and listen to a music video with exciting visuals than it is for them to just listen to a song.

A music video isn’t betraying the song, it’s expanding the creative horizons you have to work within.

But music videos aren’t the only promotional material. T-Shirts, stickers and other low-cost items are great for selling at gigs or giving away for free. These help you out by turning fans of your music into free advertising. Not only will they have the name of your band displayed somewhere, but somebody who buys your gear is also more likely to talk up how great your music is thanks to a sneaky psychological trick that makes people want to be consistent with themselves. After all, if they’re wearing your t-shirt you can’t have been that bad, right?

Every time you play a show, sell a song online or chat to a fan, you should be collecting their email or some kind of contact details. Having a direct link to people that you know enjoy your music gives you a fantastically cheap and easy way to alert them all en-masse next time you have something coming up, like a gig or a new release.

This is far more effective than trying to market yourselves to strangers. Getting the first few people interested is a matter of making good music and a little persistence. From there things get much easier. Once somebody has opted in to hearing more from you, then it’s easy to let them know that they can bring a friend along to the next gig at such and such a date.

If you don’t collect email addresses, Snapchat and Facebook details, you’re severely limiting your ability to promote yourself. One of the easiest ways to do this is to have somebody on the door at your next event or working their way down the queue to collect the right kind of information. You hardly ever see new bands doing this, and it’s easily one of the most common marketing mistakes musicians make that hurts the most.

Trying to do everything on the cheap

Between hiring out transport, replacing faulty equipment and the often neglected need to eat, there isn’t always a lot of money going around for anything else.

But if you try to market yourselves using nothing but whatever you could dig out from underneath the sofa cushions, you’re going to be very limited in what you can actually do.

Now let’s be clear, I’m not saying you need to spend thousands on getting shout outs on radio stations and the like. At the end of the day the thing that’s going to make or break a marketing campaign is the quality. No matter what tactics you implement, you’re going to have to make them count. If you’re posting flyers around, make sure the artwork is beautiful, the dates and names are clear and that you’re putting them in the right places. If you’re designing a new t-shirt, don’t hire somebody to do it for pennies. Get a professional graphic designer to come up with something unique and eye catching. The look and feel should be good enough that people want to wear it as often as possible because it’s their favourite t-shirt.

If it means saving up a little and skipping out on one or two parties, so be it.

At the end of the day you’re a musician first and a marketer second. It’s always okay to bring in some outside help, but knowing the most common marketing mistakes musicians make will help you set yourself above the crowd by embracing the new opportunities available to you for promoting your music.

Belle Miners release single Fall In Love With Me