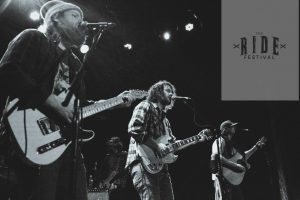 Futurebirds are an indie rock band formed in 2008 from Athens, GA. They are known for their high energy shows and country rock infused sound. We also consider them to be quite the song writers as well. Their music incorporates reverb-soaked four-part harmonies supported by pedal steel guitar, rhythmic percussion, banjo, and acoustic and electric guitars with heavy feedback. Their stage show is not to be missed.

The band has often shared the stage with Widespread Panic, Drive-By Truckers, Dead Confederate, The Whigs, Blitzen Trapper and again with Grace Potter at this years RIDE Festival.

Carter King of Futurebirds brings us behind the scenes of their most recent album ‘Portico II‘ and shares some stories from their musical background to trespassing tickets on the road.

What are you looking forward to most about The RIDE Fest?

I am very excited to take in a deep lung full of Colorado air in such a beautiful place with such a rich musical history. And of course, drink a delicious beer at high elevation.

Someone once described our sound as a ‘rusty chainsaw dropped into a tropical aquarium’ I’ve always felt that nailed it.

As fantastic players could you tell us a little bit about your music education?

It’s kind of a scatter shot for all of us really. For me personally – I started my formal musical education on trumpet in the elementary school band, then a drum set made its way into the house for a few years I think. All alongside a steady rain of hand-me-down Grateful Dead tapes from my sister and Pearl Jam tapes from my brother. My mom bought me a Sam’s Club electric guitar when I was 11 or 12 and that was Game Over for me – I taught myself mostly off the internet, but for a few years in high school I took guitar lessons from an amazing teacher who spent just as much time teaching me about rips in the fabric of spacetime as music theory and scales. I was a heady little dude so that was all good by me. There was a music theory class or 2 in school, then lastly the Music Business program at the University of Georgia, which led to really gearing up our recording knowledge and ability from the great David Barbe.

Tyler Childers, Joe Russo’s Almost Dead, and always Grace Potter. She took us out on one of our first big tours way back in the day. She is a true entertainer, through and through. It’s amazing to watch.

What did you learn in the recording of Portico II that you are bringing to the table for your next recording project?

We’ve found we’ve gotten to a point where we don’t need a big block of expensive studio time with a clock ticking down and expensive producer to make an interesting, high-quality record. I’m not saying we won’t do that in the future – we just really seem to flow best in a secluded, low-stress environment. The live-in vibe of the Portico setting allowed the fun and interesting ideas to come to the top naturally of their own accord at any time of day or night, rather than trying to squeeze them out in an allotted afternoon. It’s a lot like we used to record demos in the very early days of the band. We just needed to trust and be confident in our own abilities.

How do you handle the writing of new material on the road and is it collaborative with so many talented musicians in the band?

We don’t write so much on the road really. It’s a whole different headspace. A lot of inspiration and juice comes from being on the road for sure. There’s no shortage of interesting characters and vignettes out there. Usually however it takes being home alone, sitting with it for a minute and seeing how it all connects before anything comes to form in song. Once we have some bones assembled on our own, we all get together with the express intent of giving them the necessary flesh and that’s when the process becomes collaborative – when we really start to build the monster.

How has your music evolved since you first began playing music together?

I try not to analyze it too much. No point in turning magic camp into math class. We’ve hopefully become much better musicians, producers of music, listeners, writers – as you would with anything you’ve been doing for a decade. We try to make a point to not do the same thing twice and push ourselves out of our natural sonic comfort zones with each new thing. However, we also all grew up on the forefront of the ADD generation, so I’m not sure if the music has evolved in any kid of linear way per se. I guess that’s for other people to determine. We just make the stuff!

Do you have a number one crazy road story with the band?

Hmmm… Not sure what the number 1 craziest thing is, or if it would even be appropriate for this forum if I could say. I guess probably the most recent thing that sticks out was receiving criminal trespassing tickets as a band in western Louisiana for sneaking into an abandoned waterpark. It was colorfully towering out of the hot, flat landscape like a giant free bag of candy. It was even listed on Google Maps as ‘Abandoned Waterpark’ and had a 3.5-star rating! What were we supposed to do – not check it out? Five 30-year-olds sitting on the bumper of the van, getting trespassing tickets like we were middle schoolers. It was a pretty funny scene, honestly. The charges were dropped by the way and our good names are clear once again in the great state of Louisiana! No Futurebirds are headed up the river to Angola.

We’ve asked this question to a few of the bands playing at THE RIDE this year as we feel it’s important to stay on your health game while on the road. Do you have any tips or hacks to stay healthy on the road?

When you have the opportunity, get sleep! And drink tons of water! Those go for anyone really. And find a road activity that gets you out and moving a bit – jogging, skateboarding, disc golf, jazzercise, rollerblading, flash mobs, whatever – so when you have a few hours off, out the van, you don’t default to sitting at the bar, perusing the happy-hour menu.

Learn how to sell insurance.

But really, I would tell myself to take it much more seriously and take it much less seriously also – if that makes any sense. No one is going to do anything for you better than you will do it for yourself, so take seeing ideas through and getting things done more seriously. But also keep it your mind that this is Rock n Roll we’re talking about here – if you aren’t having a good time, how is anyone else supposed to? So don’t take it too seriously, lil buddy – no one cares.