Home Gear Do you REALLY need a big studio for a pro album?
Gear 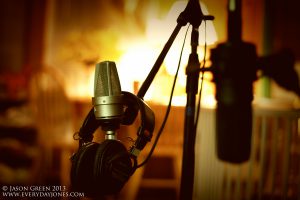 Musicians! Do you REALLY need a big studio for a pro album?
By Everyday Jones
www.everydayjones.com

Alissa and I just released “Season of Hope” without any assistance from a pro studio, so you probably already know my answer. Let me preface with this thought: Pro studios have their place. Some of the greatest records have come from there, some of the greatest recording engineers sit behind that behemoth SSL board and some of the most wonderful people I know own and run one. And if you’ve got $$$ out the ass to spend, then you should definitely get it done there.

For the rest of us, (most of us anyway), we don’t have oodles and oodles of $$$ to spend on our record. Sometimes we can hardly afford that seasoned bass player or drummer to come lay down 12 tracks and spend two days recording. And once you’ve paid them, you’ve only begun paying people, such as the person mixing your album, the person mastering your album, the person designing your CD artwork, the duplication house, and on and on and on.

So, why not save $$$ when you can and record in your own home-studio? For Everyday Jones, it was our only option.

Here are my 10 cons to recording at home. They are, in no particular order:
1. You have to have a space quiet enough from outside traffic/noise
2. You have to have time to actually record during quiet times
3. Got neighbors? Forget tracking drums
4. You have to learn how to run a DAW (digital audio workstation such as ProTools, Logic Pro or Studio One). Maybe you don’t know where to start? Try downloading from our MiXiT files to see what we did on “Season of Hope”.
5. You have to invest in microphones. Now, you don’t have to run out and get the Neumann U87, but really, anything less than at AT4050 or a Neumann TLM104 and I think you’re fighting an uphill battle.
6. You have to invest in an analog/digital converter. We went simple. We have two PreSonus Firepods. Not the best, not the worst.
7. You have to invest in a compressor. Well, maybe not, but it sure is helpful. Believe me!
8. If you’re the only one in the band that knows the DAW, guess what, you’re the one recording everyone…even yourself!
9. You have to know proper mic placement. “Fix it in the mic”, not the mixing. This is the one killer of a good record.
10. You have to be dedicated. It’s super easy to get sidetracked or complacent when no one at the controls (or the money you’ve put down) is telling you it’s time to record.

So, what are the pros for recording at home? Obviously this outweighed going in to a big studio for Everyday Jones.
1. You invest in microphones. Once you own one, you own one for as long as you take good care of it. Subsequent records (if you like the mic, obviously) will use it. You don’t have to pay again to rent a mic.
2. You invest in a DAW. See #1; Sentence two.
3. You invest in a Compressor. See #1; Sentence two.
4. You invest in an A/D converter. See #1; Sentence two.
5. You can take your time. There’s no clock ticking down. Feel free to be creative. Write some really shitty parts. Write some more shitty parts. Delete them. Start over. Pick only your best parts.
6. You are in control of your sound. Don’t like the vocal take you just did? Do it again! Comp a different vocal take.
7. You send your audio files to someone that knows, and I mean really knows how to mix the record. You may think this is a con, since it costs, but to have fresh ears on your song? It’s the best thing you can do.
8. You save money. Sure, it might be expensive starting, but if you plan on cranking out new albums, it’s not as though you have to re-purchase everything.
9. Recording this way is a 100% collaboration between songwriters. No one else is doing the work for you. No one else is making the decisions. Yet, everyone in the band must be happy with the end product. Talk about learning how to compromise!
10. Pride. It feels really fucking awesome to have a tangible item in your hand that you did 95% of the work. That’s a really good feeling. No one else made that record sound awesome (save for the person mixing and mastering), you made it sound awesome. Because you took your time, you weren’t rushed and you chose the best parts and didn’t have someone that lacked interest in your music quickly choosing parts just to get the project done.

Now, maybe you’re thinking I’m new at this and I don’t really know what I’m talking about. However, we’ve been getting reactions from our new album as one that goes up against major label releases. So, do you need a big studio to make a pro album? That’s for you to decide.
Comment below and give me your take if you’ve done this or want to do this.

I want to make several recommendations if you’re doing an indy-esque approach to recording music:
1. Who to mix your album: Graham Cochrane. This guy is simply the best. You won’t realize how flat and lifeless your mix is until you A/B it with his mix.
2. Who to master your album: It’s a toss up between Graham Cochrane and Steve Turnidge. Either one, you won’t go wrong. Steve wrote the book on mastering. Seriously, he has a book out.
3. CD Artwork: Clint Bush. Massively talented graphic artist and literally gives away his work, since he should be charging into the thousands for it.
4. Bass Player: Jason Gray. Simply the best bass player in Seattle.
5. Drummer: Cody Rahn. Cody is a mind reader. Our album went something like this, “Hey Cody, I’ve got this rhythm in my head, can’t really explain it, but can you play it?” Boom! Played it. He reads minds.