This is how DICKIE’s bio starts: DICKIE is a contrast in design.  To pair a mid-forties gray-mopped “hang-it-up-already” pop songwriter and a striking mid-twenties classically trained violinist is simply a formula for deserved obscurity. But in practice, the balance proves a brilliant alliance. I’ll let you read the rest HERE

Though this may be DICKIE’s first album, the combined years of musicality of Dick Prall and Kristina Priceman has proven that experience, heart, determination, fear, and melody provides a landscape of sonic textures and songwriting well beyond any freshman album you’ve heard in recent years. Kristina Priceman (aka TIN TIN)  is 1/2 of DICKIE. She took some time out to answer a few questions and introduce their latest Daytrotter recordings and video. 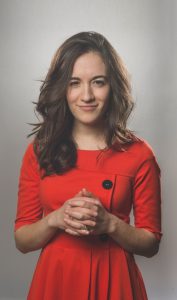 You and Dick mention your age difference right out of the gates in your biography. Why was that important for you to address and how does that come in to play in the studio, on stage and on the road?

We note our age because it’s not as common and found it coincidental that despite our twenty year age difference, we started playing music the same year. Dick recently told me that I am an old soul, to which I replied, “maybe you’re just immature for your age.” That pretty much sums up our relationship.

Kristina, I know you’ve traveled the world with previous projects and play multifarious styles of music. How does DICKIE differ from those experiences?

For starters, I’m one of two people versus of one of six, so there are the obvious logistical and monetary perks that go along with that. When Dick and I first met, he mentioned he wanted to have a band where violin was the lead instrument. I had never played in a band without a lead guitarist, nor had the opportunity to take on that role myself, so that’s unique to this group. I’m also way more involved in the day-to-day tasks of what keeps this band going. From the time we started writing and working together on the DICKIE record, Dick insisted that I wasn’t a member of DICKIE, but rather, we are DICKIE and DICKIE is a band. It’s one thing to say that, but he shows it every day, too. I have a voice, my opinions are valued, and we agree that the band will only be successful as long as the two of us are involved.

When the two of you play as a duo you creatively trigger a number of backing samples and tracks. Did you feel like you were taking a risk using samples live on stage?

It changes with the day and we still doubt it regularly. A few weeks ago we were getting set up and Dick said “Should we just play this show acoustically?” It’s still new, it’s still scary, and it’s still uncomfortable.

In my mind there are two risks: 1. The technology glitches. 2. People don’t like it.

The technology risk scares me the most. We’ve had some weird things happen that we couldn’t control and we still can’t explain. That said, having tracks fills out our sound and in the right setting makes it more interesting, but it doesn’t define our live performance. There’s no guarantee that people are going to like anything we do and I think it’s important to acknowledge that. I think our strength lies in the versatility to play with tracks and without and to deliver a set that works for each space and audience.

How are you marketing this album and your current shows differently than you have in the past?

It’s the first album Dick and I have made together, so we’ve just been pulling all of our resources from past experiences and endeavors to get the album into as many hands as possible. We submitted to radio stations and blogs when it first came out and we have digital distribution with ONErpm. We haven’t been able to really tour extensively yet (something we hope to change in the next 6 months) due to jobs and life stuff, but we try and market the shows we play by submitting to press outlets, do radio/blog interviews when they’ll have us, and of course, push them on social media.

None of this is possible without the help of our friends and family, though. Chris Weller, Mandy Recker, Dave Tamkin, (That’s you, Dave)  Jordan Walker, Jarrod Cooper, Carl Walser and the Scratchbang team (to name a few) have all pitched in to help with day-to-day tasks for no other reason than they believe in us and want to see us succeed. Maybe it’s because I’m sleep deprived, but it makes me teary thinking about the fact that it truly is people like them and our loyal fans that keep this band moving.

You mentioned you use ONERPM for your digital music distribution. How have they helped you grow your fan base as I see they have your Pop Pop Pop video on their homepage.

I’m not so tech savvy and don’t know much about digital distribution, so having Jarrod Cooper from ONErpm on our side has been awesome. He reached out when we already had a release date quickly approaching–I think generally they’d like to have about 3 months to run a campaign…we had maybe a month to 6 weeks. He got us a Spotify feature right away, despite our time crunch, and has been helping us with our YouTube channel by placing ads and monetizing our videos (something I knew nothing about before). In a nutshell, without Jarrod and ONErpm, we’d be lost in this digital world and I don’t think we’d be able to say that our biggest markets on Spotify are Brazil and Birmingham, AL–two places we hope to visit! 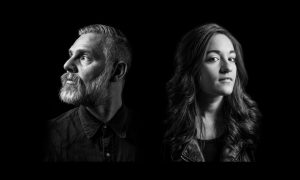 When do you two have rehearsals and what are your before show rituals? You living in Chicago and Dick in Cedar Rapids, IA can’t be easy.

Living four hours away from each other makes it difficult sometimes, but I think I’ve practiced more with this project than any other I’ve ever been a part of. Dick and I have been playing these songs together since the beginning, so I think we’re at a point now where if we can’t meet before a duo run, we’re okay….on the outside. We’ve changed our setup a few times and rehearsals came with that–we had drums, then we didn’t have drums, then we had drums, then we had bass, then we didn’t have enough money to take everyone to Colorado and voila, we were a duo. Depending on what’s next on the calendar, we may meet up a day early to run through our set. It’s been fun to play this music because we can change it up from show to show and perform as a duo, trio, with or without backing tracks, or with the jazz trio Hanging Hearts.

As for before the show, if we can, we like to sneak out of the venue after soundcheck for a bite to eat. It gives us a chance to remove ourselves from that world for a moment to relax, eat some food, have a drink, and go over any last minute details or ideas.

Who are you listening to now that inspires you?

We’ve had a lot of Sidney Bechet, Lester Young, St. Vincent, and Tom Waits on in the house lately. The most recent concert attended that left me feeling inspired and ready to practice was Colin Stetson and Sarah Neufeld. If you ever have the chance, go see them! Holy smokes.

Tell me all about your gear how you trigger your tracks.

I have a Lewis and Clarke carbon fiber violin with an L.R. Baggs bridge DI that I had fitted to it. For DICKIE shows I run my violin through a pedal board with the following: Boss OC-3 Super Octave Pedal, Electro-Harmonix Holy Grail Max Reverb Pedal, Behringer US600 Ultra Shifter/Harmonist Pedal, Xotic EP Booster Pedal, and the Line 6 DL4 Delay/Looper Pedal. I run all of this through my Fender ’68 Custom Deluxe Reverb amp. I love it.

As for the tracks, that’s Dick’s world. I know that he’s tethered to a pedal board on the floor that gives him the click, somewhere on the board is a jam man that our tracks are going through, and the case for this “holy grail” as he calls it, is janky, so I need to use two hands when loading it into the car. 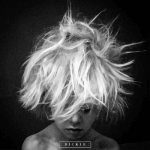 Please take a few minutes and watch this backstage view into the Daytrotter recordings of DICKIE!