written by Head Above Music December 6, 2009 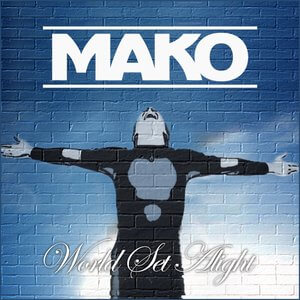 After signing with MCA/RADIOACTIVE we released 2 major LP between 1999 and 2002 with our previous band CYCLEFLY.  With years of touring through out the USA and EUROPE we got dropped by the label, why? Simply because our label merged with other labels.  When this happens people within the label get fired, to be more specific A&R Director, Press Relation etc… So all the people who were into the band are gone. The new employees like to bring new bands in. Of course if we were a multi-million selling band it would not have mattered but unfortunately in our case it did.

Declan (singer)  and I have started a new band MAKO.  The first thing we did was to write and demo our songs, to be able to arrange them using a drum machine and an editing program, in that way you can try all the possibilities very quickly. In our case, I right the music and Declan right lyrics and melodies.

After listening for a long time we decided it was good enough to record properly.  We got a drummer in and started on pre production that took about 10 sessions. I gave a head phone to the drummer with the demo without drums and bass. That made it possible to hear the music and vocals in time with a click and I was playing the bass hearing the same thing on my head phone. When we where happy with all the drums parts, I booked a studio in France.

I’ve work with producers before, but this time I was going to do it myself. So I made sure that I asked as much advise as possible on how and what mic to use for the drums as I had a pretty good idea of how I wanted this album to sound. The studio already had all the mics I needed except for the overhead mics “akg c 451” . I was able to rent them in France.

To record the drums I did the same thing as I did in the pre production.The drummer had head phone with the vocals, music, and click from the demo, it took 2 days to record all the drums for 14 songs. The whole recording and production took 5 long weeks, averaging 14 hours a day in the studio, sometimes more. But to be able to control the whole thing is well worth it , it was one of the most enjoyable times I have ever had. Declan came on the last week to record the vocals, by that time all the music was recorded and sounded much better than the original demo. Then we came back to Ireland and cleaned up on the tracks.

I started thinking about the most important part of the recording process “the mixing” We found a mixer on the internet call Larry Fricke from Germany (he is absolutely fantastic) it took a while to mix as we where only talking to him by email and had a small budget.  Thankfully he liked the songs and gave us a good deal.  After that we set up our own Label (DRIVE RECORDS). Be sure to investigate whether to open a Ltd., or a partnership.

We’ve released a single “UNSTOPPABLE” and made a video, www.myspace.com/makotunes so far we have received good reviews and feedback.  We put a live band together and have started playing a few gigs. We are now working with our management to get funding for the album release early in the New Year.

How I Write Songs

The Noble Experiment, a Night of Live Local Music