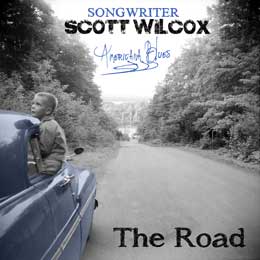 I’ve wanted to be a rock star from birth. When I was three my mother said I used to makeup great songs that would go on and on and on. My father, a semi famous disc jock in the 70’s, spent his whole life always trying to reach a star that was just out of his grasp; so naturally, my mother became very nervous when I showed quite a bit of music potential at a young age. My mother always feared that If I pursued music, I might fail, so she liked to tell me, “Music is a hobby, don’t quit your day job!”. At the age of 12, I wrote my first song and learned to play piano. As I grew older I wrote more and more songs and my voice began to develop. When I graduated high school I had already made a name for myself and had earned a music scholarship to a local college. The day I sang for my own high school graduation I received a standing ovation. I went to my mother and she said, “Music is a hobby; don’t quit your day job.” So for the next 20 years, I didn’t. I got a degree in advertising and then went back to school to be a Special Ed. teacher and taught middle school special education for 5 years. I found myself constantly trying different occupations because none of them fulfilled me like my music did.

One day, I was teaching class and a student came to me and said, “Mr. Wilcox, I love you to death. You’re my favorite teacher in the school but I have to say, I think you’re a hypocrite!” When I asked him why he thought so he said this, “For five years you have told me and all the other students that we should find our calling in life, the thing that we were meant to be and do and then follow it with all our heart and soul. Then here you are with all this musical talent and you choose to stay here and teach us. You’re not following your dream Mr. Wilcox. Doesn’t that make you a hypocrite?” I could have easily denied that he was right and told him that I get my inspiration my watching them become inspired, but the truth was; I was hiding. All my life I’d listened to the outside voices in my life tell me that my dreams were unrealistic because they were too hard. But they were wrong. What is wrong is living your life doing something passion-less and pretending you are satisfied. So, I finished out my teaching year, left my job and I began to try.

In my first year of trying, I produced my first CD called Love Notes, appeared on the Oprah Winfrey Lifeclass Show, won the Bob Dylan songwriting competition, and appeared on many local TV and radio interviews. Being in advertising and marketing for 20 years gave me the ability to market my music nationwide on a non-existent budget. Being a teacher helped me to set and reach goals, make successful plans, and even teach others to do what I did along the way. I not only promoted my music but I created a music festival where I gave others a chance to showcase their music. I started a songwriters club to help show other songwriters how to do what I do, and I volunteered to play my music for students, business leaders, and soldiers. In the brief ten minutes I got to talk with Oprah, I realized something about myself. I realized that music has never been what I do, its who I am. And I can’t deny my music any more than I can deny the blood in my veins. The only voice that matters in this world is the one inside of you. When I left teaching, I began the real adventure I was born to live. If I have one bit of advice for you, it’s to follow your passion with all your heart mind and soul, and never let anyone tell you your dream is too big to become a reality.

Before you think that’s the end of my story, realize that its only the beginning. I’ve now recorded four albums, and I will be playing at the Hard Rock Café in Chicago this March. I am still looking for a record label, opportunities to tour, write music, and perform on the road. You can reach me at www.bearcreekrecording.com.

Check out Scott Wilcox on iTunes