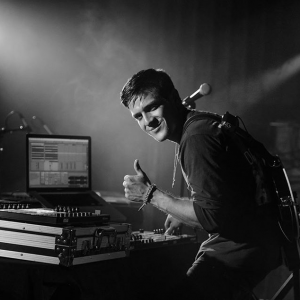 Bass Physics, a Denver-based producer named Arja Adair, has one objective in mind: to spread positive vibes through the power of music. His genre-bending sound is made up of soulful electronic beats fused with live guitar and keys. While some songs weave beautifully expressive sonic landscapes, others explode with power and energy.

Bass Physics added to an extensive list of festival plays in 2014-2015, making a second consecutive appearance at Decadence NYE, playing Electric Forest Music Festival, and making a debut appearance on the main stage of Colorado’s legendary Red Rocks Amphitheater, opening for Savoy and Michal Menert.
He seeks to always keep the party live by bringing energy and emotion to the dance floor. He made a second consecutive appearances at Global Dance Festival and Decadence, played Austin’s Euphoria Music Festival, and Electric Forest.