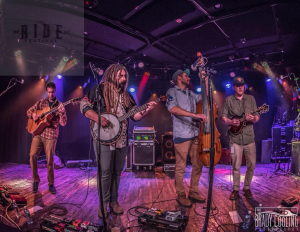 Montana-bred bluegrass outfit Kitchen Dwellers are captivating fans across the country with their high-energy live performances and unique approach to traditional music that fans have dubbed Galaxy Grass. Formed while attending college at Montana State, the group has burst onto the bluegrass scene sharing the stage with acts such as Railroad Earth, Greensky Bluegrass, The Infamous Stringdusters and Twiddle.

In recent years the band has begun to tour nationally, hitting notable venues and festivals around the country including The Brooklyn Bowl, The Fox Theatre, Delfest, Telluride Bluegrass Festival, Northwest String Summit, and The Frendly Gathering. 2017 has seen the band release their second studio album, “Ghost In The Bottle” while continuing to push the boundaries of their genre. The band is made up of Joe Funk on Bass/vocals, Shawn Swain on mandolin/vocals, Torrin Daniels plays banjo/vocals and Max Davies on Guitar/vocals

The Kitchen Dwellers play a number of performances at this year’s RIDE Festival in Telluride, Colorado. You can find them at two local venues in town on July 14th and 15th. Find out more about THE NIGHTRIDE here: https://ridefestival.com/nightride/

Mandolin player Shawn Swain grew up in Telluride, CO and sat down with us to give us some history and healthy road tips from the band.

Has the Kitchen Dwellers played Telluride, CO before?

Yes, we have. I grew up in Telluride actually, so we’ve been lucky enough to get to play there many times. The band even took second place in the competition at the Bluegrass Fest a few years back. It’s going to be great to head home and play some music for a bunch of old and new friends!

Can you give us a little history between you and your mandolin?

I started off with the mandolin when I was very young. I would take lessons in the afternoons in the basement of the music store from Dave Lamb, back when the store was still across the street from the hardware store. I kept at this for a while, but as I got older I became more interested in the heavier stuff. I actually attended the first session of Mark Galbo’s Rock N’ Roll Academy in town. I see now that it’s grown to be something pretty amazing. I shifted back to the bluegrass realm when I left Telluride for college, but both teachers have had a great impact on the way I play today. It’s cool to look back on.

How would you explain the Kitchen Dwellers’ sound to someone who has never heard you before?

Well, we definitely aren’t your granddad’s bluegrass band, that’s for sure. We like to honor the tradition of bluegrass music while at the same time we attempt to create something new, often with a heavy emphasis on improvisation. Every show should be a separate experience from the last. We essentially are trying to write music that we’d like to listen to and dance to ourselves and each one of us comes from a very different background. You can hear a lot of different stylistic influences in each member’s writing and I think that’s really cool.

What other artists on the bill are you especially looking forward to hearing the weekend of The Ride Fest?

Oh there are so many great acts. I have been a huge fan of The String Cheese Incident forever. Telluride is home turf for them, so I think we can expect a pretty stellar show. Tyler Childers is one of the most amazing young songwriters in country music right now. He’s got the right stuff so don’t miss his set. Joe Russo’s Almost Dead puts on a spectacular show every time they hit the stage. What that band can do with the music of the Grateful Dead is so fresh. It really helps to keep the spirit of that music alive today, I believe.

How has your music evolved since you first began playing music together?

I believe our songs have grown with us. We weren’t even old enough to order a beer when we first formed and pretty much just had an array of popular folk songs we’d hack our way through with a few early originals. As the years have gone by each of us has encountered a number of different struggles and triumphs that definitely impact the music. The songs I write now are so different than the songs I wrote when I was 19 because, I, am so different. I think each of the guys would agree to that for themselves. the sounds you want to make change with you.

We see you are on the road from now until September. Do you have any tips or hacks to stay healthy on the road?

It’s ok to sleep. There’s always another night. Eat breakfast. Those are three good ones that come to mind for me. It can get difficult to be out on the road as much as a touring musician has to be, but eventually you get your own rhythm to it and you learn how to keep yourself well. Being away from home that long and that often is unsettling to anyone’s body and mind, but we really can’t dig what we do anymore!