written by Head Above Music December 8, 2010 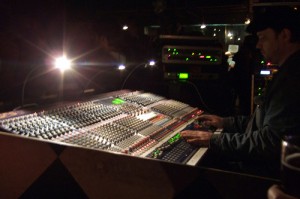 There are a lot of elements that go into making a successful gig. A musician or band practices and writes material in the hopes of making their big break, wowing the crowd, or in some cases, just getting a decent meal. A venue hopes to pack the house, or become the new cool place to be. From many standpoints, proper sound reinforcement can make or break a gig. Mere guests can become fans of a band or regulars at a venue, could stick around to buy more drinks or merch, and spread word to their friends. As a “seasoned veteran” of both sides of the coin, I feel that one of the most important parts of any gig is the relationship between the performers and the stage techs.

Relationships between a stage crew and a band aren’t always bright and sunny from the get-go, but there are many things both sides can do and understand to make that symbiosis better. I may not be the utmost authority on these types of things, but I do have some tips that can make gig night a success for both sides, and most of that advice amounts to not much more than a little PR on both sides of the coin.

Tips for the performer

Running sound well is all about control. When a sound tech has full control over the levels of all the instruments and vocalists, the best mix can be put together. You will sound better when you cooperate with your technician, and there are many easy things you can do to make both of your jobs easier. Any decent sound man knows his venue intimately. Trust what he says. If you’re told to stand closer to a mic, or that the room is small enough that the kick drum doesn’t need a microphone, it’s likely true. If the tech tells your bassist to turn down his amp, do it. There is likely a good reason for it, and the tech likely has your best interests in mind. The guy in the front row with the pacemaker would probably appreciate it, too.

Heed the tech’s advice, but also be clear about what you expect. For example, if you’re going to switch from a guitar to a mandolin for a few songs, the tech needs to know in advance of your set. If you need adjustments to your monitor mix, be clear about it, but polite, as well. Make sure you’re happy with the mix before you proceed. Throughout the gig, its always a good thing for a dialogue to exist between the act and the tech. If you don’t talk to each other, how is either side supposed to know what adjustments need to be made to make sure the overall sound quality is at its best?

The key points are as follows: communicate, be prepared, and trust the sound tech or stage crew. The most important thing, however, is to BE ON TIME. Every venue functions differently, so be aware of when you need to be there. Be early enough for your set or sound check so that you’ll have the maximum preparation time. Make sure your instruments are tuned before you set foot on stage. Have your picks, sticks, bows, pedals and amps on hand and ready to be set up on stage. An efficient sound check or set up will increase the odds that your gig will go smoothly, and establishing a friendly, professional relationship with the venue’s tech staff can improve your chances of being invited back AND that your set will have a positive impact on the crowd.

Tips for the tech crew

Any solo musician, band, ventriloquist, mime, poet or domestic shouting match just wants their art to be heard. Well maybe not the mime, but other artists are very concerned about sounding good to their audience. Its the sound tech or crew’s job to make sure the performers sound as good as they can when they are on stage. The best way to make a performer sound good? Make sure they are comfortable onstage.

Show them that you know your sound system and stage setup well. Be confident in your orders while still being polite; be a tour guide, not a drill sergeant. If there are any limitations to your sound system or stage setup, the performers need to know. If there’s only one channel for monitor mixes, or if one of your mics tends to feed back easily, don’t keep it a secret. Be clear in what you ask of the performers. Whether its during the sound check, in the middle of the set or after the gig, communication is important.

Be aware that most musicians are not technical experts like you are. They may need guidance, and it may be necessary to tell a performer where to stand, what they need to do to give you a proper sound check, or how to interface their gear with yours. There are also some things that you are better off asking than telling. Ask if they want a warning when their set time is almost finished or if they can keep their own time. Ask them if their monitor mixes are satisfactory at least a few times during the gig. If a band can’t hear themselves, chances are they won’t perform as well, making it harder for you to do your job. Most of all, be positive. Make them feel good about their set. Feel your performers out (not up). Some like constructive criticism, but some don’t want to think about anything during a set. They may want a confidence booster, or your advice may throw them out of their zone. Its important to be friendly, but you have to allow them to “do their thing” as well. Don’t try to control too much.

The most important things for a tech to remember are communication, preparation and respect. Do you sense a pattern here? The stage tech/crew and the performers need to realize that they are both on the same side. Both have the same goals in mind, so proper and polite communication are key to producing a successful gig. No matter if its a ratty basement punk rock show, a coffeehouse open mic, or a world-renowned venue, teamwork is a must. Whether its a tiny stage with one mic or a huge system with amp racks the size of my car, a solo act or a symphony orchestra, communication is the lubricant that keeps all the gears turning smoothly. That is the one common denominator when plugging any act into any stage setup. You’ll notice that the main points of my argument are neither technical nor musical in nature, but focus on those common elements between two people or groups of people that only want the same thing: to see a million faces, and rock them all! Go forth and wreak havoc!