MUSIC VIDEOS: RICK ROLL AND ROCK ‘N ROLL
By Sean Williamson of Jimmy At The Prom

So you just show up, plug in, the lights are up, the video is rolling, and someone just brought you a warm towel, right? Oh, and I forgot to mention it already has 100k hits on YouTube…right? Well, unless your name is Jack White

or that newswoman who fell out of the grape tub

you’re doing something wrong. Better yet, you’re about to get words that are suppose to help you get 100k hits from me…a musician scrambling to get out of debt working a bar tending shift tonight, just to get up and go back to work at the crack of dawn…just to free up enough time and money to invest in…the band. So, my 2 cents…

The trick is always in who you know in the “making of” a good music vid, but it needs to be paired with a ton of moving parts that work toward a common thread. Then it has to be interesting enough for people to care about. Jimmy at the Prom’s music video to “Made of Wax” was a perfect storm of who we knew, musical preparation, logistical preparation, and some luck. 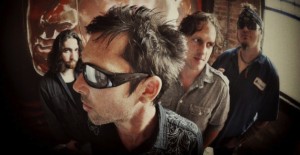 A tattoo artist, an animator, a film director/editor, a technical director of a major local theater, two assistant engineers, and four musicians made up the endeavor. Two songs were chosen in hopes that one would land a live take from front to back, as the audio and video were to be recorded simultaneously. First, bassist Matt Turner and myself conceptualized the artwork and put the execution in the hands of Steven Bossler of www.greenseedstudios.com. Then, www.harvest-motion.com animator Dave Kiehl worked off a storyboard I drafted to put the artwork in motion. From there it was the magic of Bryan Mir at www.blend-studios.com to put the pieces together in a way to fit the song and vibe of the group. The endeavor coincided with the release of our first record, which was all recorded at the same venue in the same fashion, and served as a launch pad for promo.

So, where to start… If you don’t know anyone in the field, and money is tight…Google is your friend. Freelancers are going to be a lot cheaper than firms, and students are even cheaper than that. Get a list together of all your local film or tech schools and pitch your idea to an instructor. Go to a theater venue and find the photographer shooting a national act and get his/her card…chances are they’ll give you their personal card and not the venue you’re in. Go to a local film festival and start talking to people…chances are you’ll find some hungry directors with crazier ideas than your own. Research is so key. You can spend so many hours looking in the wrong places and at firms that charge six figures more than your budget.

Once you have assembled your team of sorts, then the work really begins. Coordinating and communicating with everyone at once is difficult. Tech specs need to be shared across the board, song length vs. frames per second vs. HD vs. your damn outfit vs. extra hands vs. everything else has to be ready to go…because you’re probably renting a venue, paying people hourly, and everyone is hungry and waiting for you to buy them lunch on the day of your big shoot.

Knowing your end-game budget is key, knowing your music is key, and having a solid timeline is key. You don’t want to get caught 1000 bucks short, you don’t want to show up unprepared, and you can’t launch the product unless everything is finished on time. Even with an air tight game plan, something always happens…but if you’re patient and give yourself a couple weeks of buffer time…you might not go entirely crazy managing all the working parts. For example, just look at the swiftness of Lana Del Ray’s campaign  from her October 10th single released on vinyl to her December 1st YouTube channel release. That is signed, label speed, and it should give you an idea of how fast you have to move to stay current.

All of that said, the music is the most important part of it all, and then still having a budget after that is hard to pull off. One must decide the most effective allocation of budget without dropping it all on one element. The decisions are tough.

Please pass along this video

to a friend, then tell that friend to tell a friend, and then watch this video (http://www.youtube.com/watch?v=dQw4w9WgXcQ), and look how many hits it has.

Check out Jimmy At The Prom on iTUNES!

I’m listening to Elixir on Mute & Kyuss these days.

The Quite American and His Instruments