Going Outside the “Bar”

Going Outside the “Bar”
by Luke Andrews

As an acoustic artist, Playing to your friends and family, around the 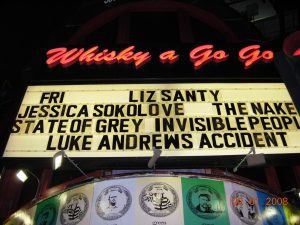 campfire, local coffee houses and small bars is a no brainer.  But, I challenge you to go outside your comfort zone .

I once opened up for 5 punk bands at the Speakeasy in Downtown Toronto with simply an
acoustic guitar. Since I had just a couple friends there to watch me, I wanted to fit the mold, so I played an acoustic version of Nirvana’s Lithium.  In the middle of the song, I had everyone clapping, singing along and having a blast in the audience. I don’t intend to sound vain or cocky, but this sort of thing is how I have gained “fans”.  In order to gain new fans that are not your friends and family, you have to go outside the “bar”.

As a solo acoustic act, I have played private parties, antique stores,
backyard b.b.q.’s, small venues, huge venues and pretty much anywhere
anyone will let me set-up.  With my band, The LA Accident, it takes a little
more logistics, but we have played just as many different types of venues;
The LA Marathon (while people run by), car races, little theaters, campgrounds,
kids parties where I’ve had to learn Justin Bieber and Jonas brothers.   I’ve had
people ask me to sign their running suits, race car jerseys, books and
anything that they have on them.  I am in no way a famous person, but
when you are playing with a microphone or a band in public places,
people assume you are special.  This is “outside the box” or more
relevant “outside the bar” thinking.

I have played countless bars where I leave half in the bag with no energy
or excitement left, because I am not gaining new ground; I am playing covers
and originals to people that could care less who was on the stage.  If you play
somewhere that 1000 other bands have not, you are creating something
new. That’s when the pictures are taken, the articles are written and
the people remember you.

I am planning a summer tour in Arkansas and Texas and I have literally
just showed up at venues and asked to play.  Like the Little Theater
in Mena, Arkansas; unless you walk in, like me and my girlfriend did,
you wouldn’t know they rent out this 250 person venue for $200, that’s
potential to make $10×250 people = $2500 – $200 (rental fee) = $2300
PROFIT POTENTIAL! You don’t always have to make a cash deal to make
money and most of the time you will make more if you think Outside
your comfort zone.

In Hollywood I have “paid to play” many times, but
never reallly paid. I have seen young musician pull out $400 out of
their personal bank accounts to play at The Whisky A-Go-Go, Viper
Room, Key Club, Roxy, etc..  Fortunately, we usually break even,
except for our residencies; that’s when we start making some money.
Find a booker that will let you play somewhere more than once; like
once a week or once a month.  Then, you can promote the hell out of it
and people know that The LA Accident are playing at The Derby every
3rd Friday. When we did this, we made either $20 or when our friends
brought their friends who turned into fans; we made $400, $750, etc.
Usually, in Hollywood, if you have a good relationship with the
booker, they will allow you to make money after you have a certain
amount of people through the door that say your name.  The booker that
we have done the best with is “Can of Jam” who is now also “The
Codega”.

Even though Los Angeles is huge city, once you get inside
the music industry and think outside the box, you will realize there
is not that many “players”; meaning people you have to compete with.
If you are doing something all the other bands in Hollywood are doing,
like playing for 30 mins at the Whisky on a weekday for 50 ticket
sales, then you aren’t gonna do much but that. On the other hand if
you are networking with random guests a the Whisky that you did not
sell tickets too and they book you are for a private backyard bbq, now
you are a “player”.

Back in 2008, I responded to a craigslist ad for a Kids Bday party.
Even though the thought of playing 2 hours of Jonas Brothers and Miley
Cyrus made me gag a bit, I was willing to take this risk.  When I
walked into the women’s house to “audition” she immediately hired me
because I was young, polite and dressed appropriately.  This has now turned
into 3 parties for different families over 3 years. This year, having
to learn the new pop idol, Justin Bieber’s songs and told that Miley
and Jonas’ were OUT was amusing yet painful, but was a big paycheck.
What bands don’t think about is that for the other 2 hours we are
playing, we get to play our funk, rock, reggae and blues originals
and sell CD’s to the parents…Outside the bar, inside a hall attached
to a church.

Unfortunately, against your will, as an independent artist you have to
promote yourself constantly.  It would be great if we had Madonna’s
manager to push our CD’s, but this just isn’t the case.  If you put
out an album independently, there is two ways to look at it and
generally two different outcomes; they sit in the box or they get out
to the world.  In 4 years, I have released two full-length albums and
4 EP’s and usually break even with the hard copy sales totaling about
2000 units. The reason I break even is usually because I give about
half of that 2000 away and call it sales.  At LA Accident shows, we
hold dance competitions and the winner gets a CD. This usually leads
to sales that may of not occurred if we said had not said anything
about our merchandise booth.  We let radio stations, cities, charities,
family and our friends give them away and when the physicals are gone,
we are in 5 local newspaper articles and we have digital sales that
continue forever (make sure you check out Tunecore)

Finally, it’s important to always carry your cd, if possible, or at
least have business cards wherever you go. Living in Hollywood, I have
met Brian McKnight, Ryan Tedder from One Republic, Shaun Murphy of
Little Feet and guitarist Ben Carey from Lifehouse, to name a few.  I
talked to them for a bit and handed them my cd at the end of our
conversation.  I’m not telling you this has gotten me really anywhere,
other than encouragement, but if I didn’t have anything on me, the
potential of connection down the road vis 0%.  Who knows when someone
could call? Bottom line is, I would rather have 1000 cd’s out there,
then 1000 cd’s under my bed; Outside the box, outside your comfort
zone, outside the “bar”.

What is one thing you can’t live on the road without – merch table with sales rep.

Who are you listening to now?  The Black Keys

How to Help Your Guitar Survive Your Next Flight

The Quite American and His Instruments