Home Music Astronoid and the power of ‘Air’
Music

Astronoid and the power of ‘Air’

Before I get too far into this article I should let it be known that, “I think Astronoid’s album, Air, is phenomenal.” 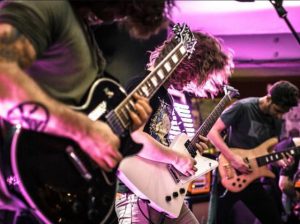 Air was easily my favorite album of 2016 (and from Bowie to Ulver, 2016 was packed with winners) and a very short period has become one of my all time favorites. It is an epic piece of musicianship like I have never heard before. From it’s soaring, grandiose, falsetto vocals, to the amazing shoe-gaze drenched speed metal guitar and bass work rolling across blast beats played at Mach 5.

When the amazing label, Blood Music, posted an expanded teaser of the album a couple years ago I was instantly hooked. Having purchased it on CD and then the re-mastered for vinyl LP I am thrilled to have been able to have these guys answer some questions I had about all that they do (and a huge thanks to them for taking the time to do this right after a monster tour with Moon Tooth).

1. You all went from pretty much unknowns to on or topping everyone’s best of lists for 2016. How has this huge wave of success and notoriety affected the band members, writing, playing, personal lives.

When the record came out we couldn’t believe the response it was getting. It felt really good to see people reacting to the music we put so much work into. Once it started gaining steam I personally decided to leave my job in NYC and move back to Boston with the rest of the band to support the album and give this a true shot. We took our time to reorchestrate the live performance, added a lighting component, and really tried to make the live performance as powerful as the record. We believe there is a visual element to the band that needs to be a part of our live performance, and hope to grow that as we continue.

2. It seems a lot of your press/success comes from your unique style (along with amazing writing and playing of course) You all have been called everything from shoe gaze death metal, psychedelic speed metal….I like to think of you all as psycho-death-gaze-power-blaster-metal; where did your unique sound come from? Was it something you all set out to do at the beginning or did it take shape as you all started to write and build songs together?

The sound of the band took shape throughout the writing process for the album. We really didn’t have a set goal or sound for the band. We wrote about 15 songs for “Air” but only 9 made it onto the record. Some songs went into directions that just didn’t fit. We tried some ideas that needed to be tried, and resulted in other ideas that ended up working. Our sound comes from the wide variety of music that we all listen to. We love metal, punk, pop, prog, and everything in between. We have no shame in the music we love, and we wrote music that we wanted to hear. It was a tough process crossing some boundaries that really weren’t there. Is it cool to sing over that part? Can we put a blast beat with those vocals? It was a lot of trial and error, but we couldn’t be happier with the record we crafted.

3. How did the relationship with Blood Music come about? And how has that helped boost your overall exposure?

Blood Music approached us when Stargazer come out asking if we were working on a full length record. We showed him the demos and he wasn’t too sure if it would be a right fit for the label. We understood, and kept working on the record. A year later he approached us again and asked how the album was coming together. We sent him the near completed album and decided that we were a good fit on the label. The record has been doing really well since its release and we couldn’t be happier!

4. When I first heard the samples from Blood Music (before the release of Air) I was amazed at how uplifting the music is. Is the uplifting/powerful tone of Air something you all strived for? Or were you all just in a really good mood writing that album :)?

Air seemed to be the natural progression from Stargazer for us. I was listening to a ton of epic music at the time like Devin Townsend, Enslaved, Ihsahn, and some Dream pop stuff like Mew and M83. I’ve always loved the vocals in Mew and M83. Very ethereal and ambient. The uplifting nature of the music came naturally. I wanted to write something that made me feel good, and something that can be sung to. We mixed all of our favorite parts of our favorite genres in a way that was organic and true to ourselves.

5. What’s next after all the touring? New material in the works? New Album? Staying with Blood Music?

We are always working on new music, but that doesn’t mean we are working on the next album. I assume the process will be similar to Air where we write until we stumble upon something special to us. We will know when the time is right.

5. If you all could go back 5 years, what lessons would you relay to yourselves?

I wish I could have told myself to stay confident throughout the writing process of the record. To go with my gut. There were a lot of times during the writing process that I would second guess myself. If Dan hadn’t put his foot down during the mixing process of the record I’d still be mixing it. We wrote the music that we loved to write and we did it for ourselves. That’s why we play and write to begin with. Write what’s true to yourself.

6. Can you guys give me 5 bands that are currently peaking your interest?

The bands I’ve been listening to the most lately have been Peter Gabriel (Security, Melt), Genesis (Gabriel-era), Mastodon, Behemoth, and lots of Mew (highly anticipating the new record of course). I swear, I do take breaks from listening to Mew, but they are just so damn good.

Best of luck, thanks again and hope to see you all in CO soon, and for what it’s worth, I can’t believe how well the album sounds on vinyl. Loved in on CD, but WOW!

Thanks so much dude! We did a new master for the Vinyl and we are really happy with how it came out! Hopefully we will be seeing you in CO soon!

We’re Giving Away an AirTurn Concert Package Worth $167!