Home Gear Climbing the Wall While Not Being Signed
GearMusic

Climbing the Wall While Not Being Signed

Climbing the Wall While Not Being Signed
By Mimi Page
Los Angeles, CA 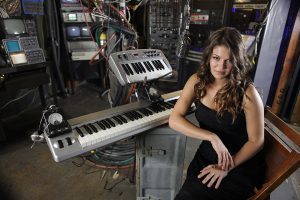 I started composing on the piano at 5 years old. What started out as a natural hobby turned into a daily necessity, and at age 15 I decided to make it my career. Easier said than done, especially in an era where the music industry is rapidly changing and making it harder and harder to catch a break. The more I put myself out there, the more I realized the days of being discovered and sponsored by a label’s big budget are dissipating. Overwhelmed, I had no other choice but to shift my perspective and embrace the challenge of doing this completely on my own.

Now at age 23, I’ve recorded, and self produced a full length album in my own apartment, have 7 of those songs on 4 different radio stations, and am distributing and selling my songs world wide. All of this being unsigned to a record label and with almost no money at all. The power is with the independent artist, and I want to let you all know that you can do it yourself. You just have to believe in yourself and work work work.

There does come a point in your journey where you reach a wall and need someone else to help. Myspace, Facebook, Last.Fm, etc. can get you exposure, but that’s only brushing the surface. Unless you have a network of people willing to work for you for free 24/7 you’ll still be hitting the wall of being a broke musician stuck behind your computer on social networking sites. I needed to reach another level of exposure, so I took a detour and jumped into the acting world. I started out doing extra work on a bunch of different films, always carrying demo cds in my bag in hopes I could give it to the right person and get a song on their soundtrack. It was a long shot, but that’s the power of belief.  I was fortunate enough to land a regular gig on a tv show and finally hand my demo to the right person.

A fellow actress and dear friend of mine listened, passed along my CD to her husband, and that’s how I landed my manager Bill Hons. Because I did all the beginning footwork myself, I already had a finished product ready to be worked with. Bill began shopping me to all the “big” people, the ones who were unreachable from my end. Bill gave me a voice in the industry, and one that made people turn their heads and listen. I’m one of the few, if not only unsigned artists with a song on Sirius/XM Satellite Radio. Although it takes a great song, it’s the business person behind scenes who’s scratching and clawing to get that song heard. My advice to all artists reaching that wall, is to find that one person who believes in you and is willing to help you fight your battles. Just make sure they understand you and really believe in your work. Because at the end of the day when you’re tired and drained and starting to doubt yourself, they’ll be there to remind you of how awesome you are.

Like I said previously, I record and produce all my songs in my own apartment. At 15, when I started taking my music very seriously, I knew it would be highly unlikely I could write an album in a professional recording studio with no budget. I looked at my options and found the only way to move forward was to learn how to do it all myself. So I investigated different schools, transferred out of my regular high school and went to a specialized music academy which had fantastic music theory, piano and electronic music programs. I spent every lunch period and hour after school learning how to record and produce myself. By the end of senior year, I had my first album completed. From there, I attended a vocational college for recording engineering and learned how to build a semi-professional recording studio in my own apartment and mixing/mastering techniques to make my demo sound high quality. Without a budget to buy expensive external hardware for recording and mixing, my technique has remained entirely within LogicPro. The EQ and compressor settings I’ve found have worked for me, and the variety of virtual instruments I’ve been able to charge on my credit card are my main tricks. But all of this is icing on the cake to my main foundation: a good song. And to write a song that touches people, can only come from life experience and your own creative interpretation of it. You can’t buy or learn that.

The most important lesson I’ve learned in my journey thus far, is to just enjoy the ride. I’ve spent so many sleepless nights worrying if all of this hard work is worth it. Although things are moving forward for me, I’m still faced with the fears of paying rent every month. As I’m writing this right now, I’m pretty sure all I have is bread, water, and half empty condiments in my refrigerator. I also still worry about rejection and criticism, because despite how strong I feel I’ve become, it still hurts like hell when someone doesn’t like you. What I’ve found works for me, is focusing on all the other amazing, wonderful people who do understand and love my work. I still communicate with some of the fans I had when I first launched my myspace. I love my listeners so much, and to be able to connect with other people and move them with my music is the reason I keep fighting the fight. I think that’s the most important thing, to keep the focus on what your intention is in this business. I just want to make people feel, and escape in the world of music.

Check Mimi out on iTunes Here!

The Skinny of Show Preparation