I’m writing this article as guitarist Jake Goldman and I barrel towards Denver on our return from shows in the Midwest. Tickling my mind is the debate between artistic mystique and fan accessibility.  Stevie Nicks supported the mystique camp in a recent issue of Rolling Stone magazine when she said “I don’t have a computer or a cell phone because I don’t want to be that available to anybody. I’m all about mystery.”  I counter that this notion held true in the glory days of Fleetwood Mac when recording a record was filled with mystique and exclusivity.  We now live in a time when a decent recording waits to be made on any Apple computer or PC.  For many years I’ve modeled my marketing after my musical heroes with their high quality photos, slick packaging and concise calendar emails. However, the results made me question my approach.  I realized the folly of following that pattern: I modeled my plan from those whose albums already grace millions of households. I realized that I needed to relate to fans while OFF stage as much as ON stage.

Meese released web video of their spoils in major label-land.  MUSE’s Matt Bellamy writes blogs while Moby writes album credit manifestos – even Rush have an online forum where fans can ask the band personal questions.  CDs come packaged with DVDs documenting band recording processes, sharing stories, emotions, and a general inside look at their lives.  More and more, bands today are revealing the people behind the music.  Musicians are breaking the fourth wall and now, so am I.

The artist with the largest audience tends to be the one with the least distance between their fans.  I’ve started an experiment to see how revealing, related and personal I can be with mine.  Stage 1: Changing the direction of gig promotion to a more personalized style, including quickly edited short video blogs of our road adventures. With Best Buy camera and crude editing I shared such moments as my discovery that in certain truck stops The French Tickler has been renamed The Freedom Tickler, or my road side interactions with Police in 3 different states and even a peek into rehearsals full of band banter and interviews. You know what? If show turnout remains a crucial measurement of success – It worked.  Without printing a flyer or hanging a poster we had a great enthusiastic showing at The Walnut Room. The following show in Detroit did even better and we managed to play to a quite full house.

Our audiences want to know that we are people they can support and access and, more importantly, contribute to.  Music is inclusion. While talking to Ariel Hyatt, a good friend and social media evangelist, she reinforced that many bands aim for the audience that they don’t yet have while forgetting to nurture their current supporters. I’ve been guilty as charged and I’m making up for lost time.

– Through this monthly article I plan to continue this experiment and would love to hear from you  (xiren.net/contact) 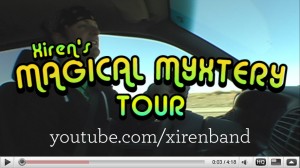 Remember to Love it

Misadventures, Missed Turns and How Not To Be Famous On Tour: A passage to India: Part I