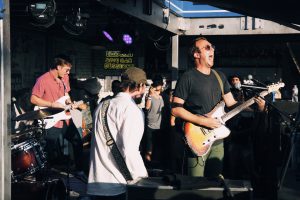 After an explosive set at Grandoozy Festival in Denver, Wilderado cooled down with us behind stage for a few questions.

You’ve made a huge splash in a short amount of time. How long have you been together?

We’ve been doing it for a while, 4 years. It’s cool to hear that people are saying that there is a splash, talking about us and singing our songs.

How did your hometown influence the energy of your music?

We grew up with pretty eclectic music all around us. Being from Oklahoma and Texas we had a lot of country around us but also different styles of music. Because of that we don’t try to write a certain way for a certain genre. We just really like to write

Have you had main inspirations when it comes to music or art in general?

Oh man, art in general? That’s a new one. We are always listening to something new and draw inspiration from that. When we play together it doesn’t always feel good but when it does, we all know. We all look at each and stick to something along those lines. There isn’t really a method to it other than what feels good.

If you want a couple of bands, we listen to a lot of Cold Play… At least their first two records, Third Eye Blind, Kings of Leon… That type of style is what matches our sound the most I guess

Are there up and coming bands that you are excited about?

I don’t know how up and coming they are, but do you know White Reaper? They are a couple records in, but they are bad ass. Very bad ass. Just rock and roll. Their guitar parts are so good.

Also, not up and coming but Broncho is one of our favorite bands.

Your live set is very energetic. Is that a focus when it comes to writing music?

We have in the sense that because there is just the four of us playing it so we are particular of what we can and can’t do. And after touring this much we are seeing that the people like the tunes that we do and are the high energy ones. We’ve also been opening a lot so we have 30 minutes to capture that audience and it’s more fun for us.

What is your most ambitious, creative idea? It could be the first thing that comes to mind that you haven’t done.

Write, score and direct a film.

Do you have a plot line you want to go for?

Hundreds of plot lines! I think sad and a little dark. We’ve been writing such up-tempo tunes. We do have some daunting lyrics at times that I think would work really well for that. Really, we are just waiting for Michael Bay to call us.

Check out the final day of Grandoozy with Head Above Music. Tix still available HERE