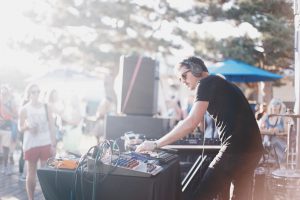 Roger Sellers, also known by his stage name Bayonne, is an American minimalist composer and electronic musician based in Austin, Texas. After releasing three albums under his own name, Sellers changed his moniker to Bayonne, with the rerelease of his most recent work, Primitives, on Mom + Pop/City Slang in 2016. Bayonne is known for creating and layering intricate loops as well as his engaging one-man live performances. He performed two sets at Grandoozy yesterday and took some time to sit down with us in the evening hours.

With this being the first year of Grandoozy what are your initial impressions as an artist?

It’s been a really busy day as I had two sets. What I’ve experienced has been really good. I love playing Denver though it’s been unusually hot for Colorado. I was excited to come to Grandoozy as I’ve played Lost Lake many times and the Bluebird Theater.

You’re from Houston and now live in Austin. How do you think the Texas scene has shaped you as an artist and your music?

I think Austin shaped it a lot. There was a need to go there because I could book more gigs and be surrounded by more industry. There are so many creative people there. I think my music did well there and it helped in bringing me to Grandoozy.

Who are some artists that backed you and inspired you in your career?

Minus the Bear took me on tour and helped me out a lot. The overall community in Austin is so supportive. The local bands there help each other out. Overall, I’ve been able to play with just really great people. I’ve been more than willing to give that back to other artists as well.

Watching you I was drawn by the percussion and how that leads the melody. What comes first for you when writing new songs?

There is no real equation to it. Generally, percussion comes after but chord progression and melody are most important to me. From there I just start with a loop and see where it takes me. 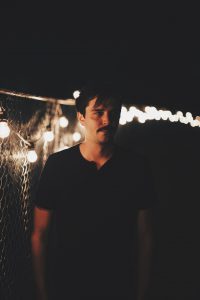 What is your most ambitious creative idea? You can say the first thing that comes to mind.

I feel like I’ve always wanted to do something super duper visual. I’m not a very visual guy. I would like to have a record or an EP that is a visual album. That all comes with finding people that you can create with. I can’t do any of that. I’ve thought about that for a long time. I would love a bad ass visual record with animation or whatever. Animal Collective came out with ODDSAC years ago. It was so fucking out there and just blew my mind when I was younger.

Check out the lineup at Grandoozy in Denver today and tomorrow! Tickets HERE