What Artists Should Know About ReverbNation’s Promote It 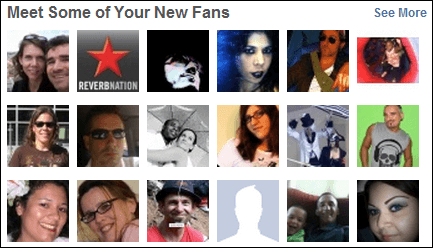 Running a Facebook ad campaign is confusing. You bid for ad placement, but the price you pay bears little relation to your bid. What’s the difference between reach and social reach, connections and clicks, CPC and CPM? More importantly, is there any way to tell how many people played, downloaded, and shared your song, or signed up for your mailing list? (answer: no, there’s not) ReverbNation’s new Promote It tool addresses those shortcomings, and then some. You pick a song, photo, and budget, and it automatically generates dozens of optimized Facebook ads based on past Promote It campaigns, and continually optimizes your campaign based on the performance of those ads. New fans click through to customized landing pages that track not just clicks and likes, but plays, downloads, shares, wall posts, and mailing list signups. As I’m quoted as saying in the press release, “It’s the ultimate ‘set it and forget it’ fan-making machine!” I was invited to try it out and provide feedback during the beta period, and I’m flattered that some of my suggestions made it into the final product. So far I’ve run six campaigns. Let’s walk through the creation and performance of my latest and most successful one.

As of this writing, there are two types of campaigns available: promote a song, and promote your Facebook page. Soon you’ll also be able to promote a show or release. Most of my experience is with promote a song, so let’s continue with that: Setting up your Promote a Song campaign requires nine simple inputs: 1. Which Song Would You Like to Promote? You should pick one that grabs the listener in the first 5-10 seconds. The song I chose starts right in on the first verse, with no instrumental introduction whatsoever. 2. Pick 5 Similar Artists. Since I was promoting a Depeche Mode cover song, I picked the band and its members’ solo projects: Dave Gahan (lead singer), Martin L Gore (songwriter), and Alan Wilder (long-departed yet still beloved keyboardist/producer) – plus Erasure, since half of that duo was in the original line-up of DM. The product manager for Promote It told me that artists who have between 50,000 and 500,000 likes work best, and my results bear that out: The Dave Gahan ads performed so well that they completely crowded out the rest. Perhaps it’s because Depeche Mode has millions of casual fans, but only the most serious ones keep up with the lead singer’s solo work, and are therefore more motivated to check out my cover. 3. Write Ad Text. You can choose to author one of the ads yourself, or let Promote It generate them all. Since my custom ad was outperformed by the auto-generated ads, I won’t bother sharing it with you. 4. Choose Picture. Your choice here can make or break the campaign! My previous campaign was identical to this one, except I used a close-up of yours truly. The results were pathetic. It should come as no surprise that a photo featuring 1) a world-famous band and 2) an attractive female does a better job of catching the eye. 5. Geo-Targeting. Choose between local (your state), national, all English-speaking countries, or global. Theoretically you should get the best results from global, but national did just as well for me in my limited experience. 6-8. Name Your Campaign, Sync with Facebook, Start Date. Pretty much self-explanatory. 9. Budget. Choose between $25, $50, $100, $250, or $500 on a one-time, weekly, or monthly basis. I recommend you experiment with successive $25 campaigns until you find a winning formula, and expand from there. My $50 campaign lasted six days. Here are the results (click to enlarge):

I was most pleased with the 44 mailing list signups, but 57 likes is nice too. There’s sure to be some overlap between those two figures, but in any case, that’s a lot of new fans who will be hearing from me on a regular basis.

How does Promote It compare to running Facebook ads directly?

It really depends on what you’re trying to accomplish. If you just want to boost the number of likes on your page, direct ads have a serious advantage: you can structure them so that a click is a like. But if you’re looking for the kind of things we musicians tend to care most about: song plays, downloads, shares, and mailing list signups, there’s no way to know which is best. Facebook doesn’t provide that information. And no, you can’t just take the best performing Promote It ad and copy it over to Facebook. ReverbNation doesn’t share the text of its auto-generated ads with you, perhaps for that very reason. But who says you have to choose? I use both. How is Promote It working for you? Please share your results in the comments. To see it in action, check out this short video.

Promoting Your Music on Facebook from ReverbNation on Vimeo.