Inviting Other Musicians to Jam

Inviting Other Musicians to Jam By Ryan Chrys 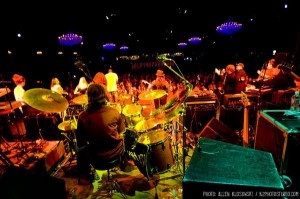 This is a topic I think often gets overlooked. In my experience it can be an extremely invaluable experience for everyone involved. It may take some pre-planning, but if you keep the idea in mind then it won’t take much at all! The benefits of this are countless. To start, if you’re on the road and playing with a local band, and you invite one of their members to sit in with you on one of your songs in your set, you’re instantly drawing their hometown fans closer to you. You’re also making a powerful connection with another musician that will likely be remembered for a lifetime. As well, getting to know someone by having them sit in on a song often suddenly opens people up, next thing you know you have a good friend and connection in a town where you know nobody. It’s so much more powerful than simply saying “nice set dude” as you walk past the other guy.

Now granted there are all kinds of cases that may or may not facilitate this, such as you just didn’t like the other artist(s), or you’re playing first and have never heard the other artist(s). Challenge! ..you could still take a risk and ask someone to join you for just one song. ..just one won’t hurt! Think of the relationship you’ll develop in that 4 minutes on stage! As well, maybe your material is complex and it’s just not feasible to have someone “jump in” one of your songs. Here’s where the old Ryan Chrys trick comes in: Always have a couple super simple songs in your back pocket for just the occasion! Whether they’re original or covers, it doesn’t matter, but keep a couple 3 chord jams handy. That way you can say “join me on this one! its super easy, 3 chord jam in the key of E minor.” Follow that by “play when you feel it, play a solo in the jam or add a harmony vocal when you’re comfortable, it doesn’t have to be huge!” I’ll tell you that usually takes the stress right out of the situation. A lot of musicians will jump at this for the same reason you’re asking. To gain more fans and friends and connections! Some musicians won’t if they are shy or otherwise, but keep it in mind and you’ll find some takers. I can’t tell you how many close new friends I’ve gotten to know by just asking a guitar player from one of the other bands to “hey man wanna jam a solo in the key of E in the middle of one of my songs?” I’m sure you all can imagine the doors this can open. See you out there! www.myspace.com/ryanchrys www.facebook.com/ryanchrys www.myspace.com/demonfunkies

Wearing All the Hats