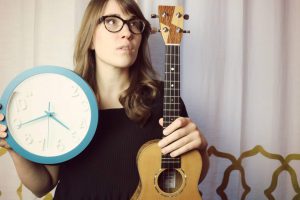 I am Danielle Ate the Sandwich, an indie folk songwriter from Colorado. Last January, I recorded an album in 24 hours. I started on a Saturday afternoon and worked through the night, with only a couple of hours of napping and lots of thick, stubborn drudging through the wild fields, we call creativity. I didn’t make as many songs as I wanted. I didn’t really like any of the songs I created, but something wonderful happened in the 24 hours I was doing the project. I felt raw and rubbed, exhausted, embarrassed, vulnerable, yet accomplished and powerful.

Though scary, I let myself be seen in ways I had never allowed before and after I had stepped away from the project, I realized I survived. I had made 8 new songs. I got the opportunity to challenge myself, be honest about my process and to live another day as a sharer of the things I create.

I first heard of the idea from my friend Robert Gillies who told me that he and his college friends used to make 24 hour albums when they were students at Berkley College of Music. Our conversation also hit on the ways we as artists procrastinate, or the time we take being so precious about our art that we sometimes sabotage our own prolificacy. When you only have 24 hours, you don’t have time to putz. I couldn’t get the idea out of my head and as a pretty confident songwriter, I wanted to see if I could do it. Besides, I make up really good songs while I’m brushing my teeth and folding laundry and cooking macaroni and cheese, so, of course, I could make an album in 24 hours!

I wasn’t sure if I wanted to announce that I was doing the project publicly as all of my “creating” happens behind the scenes and behind very locked doors. My business side got the better of me and I decided to mention and post a few things online as well as offer the opportunity to watch live streaming footage of me working in the studio. To my surprise, my fans jumped into the 24 Hour album project more than any other project I’ve done! I was getting tweets and comments of encouragement, people were posting song ideas and sharing pictures of them, their kids and their pets watching it all happen. I was tired, frustrated and mad at myself for agreeing to do such a stupid thing most of the 24 hours, but the fans excitement really kept me going. They believed in me, they were excited, they were having a ball and I didn’t want to let them down.

So, I’m going to do another 24 Hour Album project this January 14th, 2017, beginning at 2pm MST.  The goal this year is to flex the songwriting muscle again. For me, 2016 was a year of recording and releasing a new full-length album, Kickstarter campaigns, promoting and touring, which left me very little time for the making and taking of that little fire that lives inside and inviting it out, to look it in the eye and tell it “ok.” I am trying to go into this year’s 24 Hour Album knowing that I’ll get tired and feel weird with people watching, but go forth and write and create anyway, because you never know when something really good is going to happen.

Become a Patron to get the album/watch the live streams: http://www.patreon.com/danielleatethesandwich

If you could travel back in time 5 years, what would you tell yourself about what you’ve learned about your journey thus far?

I could write a book about the things I’d tell myself. I would tell myself not to worry about being famous and to stop comparing myself to others. I’d say, “Just do good work and be grateful for wherever you end up.”

Can you name 3 artists you are listening to know and what inspires you about them?

I’ve been listening to Solange Knowles’  album “A Seat at the Table” a lot lately. I think there’s a lot going on with her music, the phrasing and harmonies, the instrumentation, her visuals, and the message and story of being a black woman. (I don’t know how involved I can be with that message, as a white woman, but I like the way she shares the story through her music.)  I just recorded myself reading Paul Simon’s song “Hearts and Bones” and am continually floored by how good he is at writing words, and hinting at the sadness of where we find ourselves as humans. I love the thoughtful, yet funny songs of The Doubleclicks. They also have an incredibly inspiring work ethic.

I use a lot of sites, but I like Facebook the most. I like that you can post all kinds of content and everyone checks it every day. I like sites where there is a clear interaction between me and the people following me. Patreon is a really great site for artists trying to make a living from their work online. It is the answer to “I put all my stuff online because I want to share it and the people seem to like it, but how can I make a living releasing free content!?” For this 24 Hour Album project, I’m offering my patron a free download of the new 24 Hour Album and exclusive access to the live streams of me working in the studio. I see a lot of artists on Patreon sharing cool content and building relationships with their fans. I’d like to do the same!