creativity is dangerous
by zed mizar 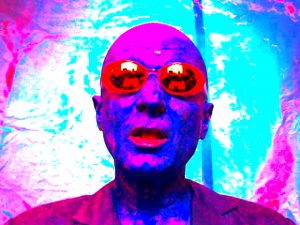 creativity is the difference between being a musician & being a music artist. not everybody in music has a calling to be a music artist & there’s nothing wrong with being a musician, it is a great calling too, but i am writing this for people who create music & have a calling to be a music artist. producers, composers, songwriters, lyricists–you know who you are. some people are just messing around with music & that’s cool too, you will know more about music than most people & it will enrich your entire life, but creating music & developing an original style is hard core. being an artist involves imagination & invention @ every stage of the game, from writing your material to inventing your persona to devising ingenious ways to produce tangible works to the magic of projecting your images into other people’s minds. how can you ever manage to stand apart from the crowd enough to be noticed? by being different, unique, one of a kind. an artist is a creative person who has to depend on their creativity. it has to be there for you whenever you need it because somebody may need something from you very quickly & you have to just do it. you have to produce on demand, you have to have access to a source of ideas that is reliable. an artist learns to cultivate their creativity so that they can depend on it because that’s what your job is. if you have another job you might have to be even more creative in a way because you have less time to mess around, less time to get things done. you can’t sit around trying to think up something to do, you have to get an idea quickly & run with it.

“you can’t be too creative” is what a famous music producer told me once. he said that because he wanted to rewrite my songs with a bunch of chiche verses off the top of his head so we could play arenas. what he meant was that no record company was going to take a chance on something that wasn’t a lot like something else that had already sold a zillion copies. in those days you had to sell a lot of copies in order to support the cocaine habits & lavish lifestyles of music businessmen so that when you got your one tenth of one percent or whatever there was enough left to matter. things have changed, however.

here in the digital age i can do what i want to do & @ least i can be proud of my work, i don’t have to put my name on a bunch of drivel that was rewritten by committee. i am free to be creative, the only thing i have to do is make music that some people like. i have found that the less i try to do music like other people do, the more i establish my own identity, the more i make stuff that my audience likes. i don’t know about you but i have found that the more wild & crazy i get the more popular it is. sure, some people will get bored if you do something they don’t understand but other people who are already bored with the run-of-the-mill cheese will prick up their ears & get interested.

people generally say that i have an original style so i think i might have something to say on the subject of creativity to my artist friends & others interested in psychology. some people think that creative people are a rare genetic mutation or something. i don’t believe that. i observe that all children are creative & imaginative, that all children enjoy acting goofy & doing silly dances for the fun of it & making stuff up. we are born creative, it is natural. a child can take a couple of primitive toys & create an entire imaginary world & get lost in it. children enjoy nonsense language & understand it & enjoy tall tales where animals can talk & anything can happen, like grimm’s fairy tales, alice in wonderland & the wizard of oz. in other words, they love everything that is weird, but somehow that natural human funny imagination gets stomped out of them by the school system & the corporate world because you need to be an uncreative cog in the wheel in order to fit into most business models. schools are there to remove your creativity so you will be acceptable to your employer. they come down hard on stubbornly creative & individualistic kids & turn them into rebels & outcasts. their peers ostracize them mercilessly. is it any wonder that so few people make it into adulthood with their creativity intact?

the first step in becoming an artist is to decide to be yourself no matter who likes it or doesn’t. igor stravinsky’s father made him go to law school but @ some point igor just had to say i gotta do what i gotta do. i am certainly glad he did, “the rite of spring” changed music forever & blew everybody away. it set the world on fire. it set music free in many ways. lots of people thought it was insane or too complicated or too weird, there was violent opposition but he didn’t care. it would have been lost if stravinsky hadn’t committed himself to his calling & went against the tide.

when people who don’t get it ask me why my work is so strange & unique (weird) i turn it around on them–why are you not creative? why did you let them stomp the creativity out of you? why did you conform, why did you give in & surrender your uniqueness? uniqueness is a law of nature, i do not have to defend my uniqueness. no two things in creation are alike, no two snowflakes or fingerprints or DNA combinations or anything else. i do not have to defend what i was born to be. no, if you gave up your dream & your uniqueness for money & the acceptance of lame people then you are the one who has some explaining to do. you are the one who is stunted & broken & unnatural, not me. creativity is natural. it is banality that is unnatural & sick. hello–this is the arts, this is entertainment, this is where imaginative people belong. what are all these people doing in the arts who are so dull & unimaginative?

here is a review i got for my song “lament of a hapless earthling”:

“mix every drug know to man and u get this song not bad dude u have a message that only a person with a metled brain would get but i like the storying (sic) telling part for what it’s worth.

good track and remember there (sic) watching you LOL”

now i have been called worse than this but do you see the insidious psychological attack? when somebody like this comes upon something unique they think you must be burned out, insane or on drugs. that is how they invalidate you. the idea is that creativity is not natural, that it is the product of a twisted mind distorted by who knows what. that’s how they condemn & ostracize you. this is on a website devoted to electronic music producers! how much worse it is in the school, the corporate workplace or the church. now it’s easy for me to laugh along with this kind of stuff & even riff with it, i can joke “yeah man those 500 hits of acid gave me all kinds of ideas” but if you aren’t careful you start to internalize these insinuations & believe them. then you’re in big trouble. i refuse to play into that game. being yourself & being creative is healthy & natural, not insane. don’t let them mess with your mind that way.

human culture matters, that’s why it’s a battleground. stupid culture makes for stupid people. if you are fearless enough to be yourself & hard core enough to hang in there you will definitely meet a lot of opposition. creativity is dangerous. creativity is its own message. i do not preach to people about politics or saving the earth & i think that kind of stuff is lame & boring. my message is to be yourself & i teach that by example, not by preaching. i think it’s the most dangerous message of all.

if you want to hear my stuff for free & read my blog posts about my music you can start @ my official site: www.wix.com/cyberwack/zedmizar. i have a lot of music on my soundcloud page: www.soundcloud.com/cybewack. hit me on myspace @ www.myspace.com/zedmizar.

one book that i would like to recommend is “linchpin” by seth godin. it’s about being an artist @ whatever you do & how there is no future in just being a cog in somebody else’s machine. it brings the internet age & the changing economy into perspective.

my favorite piece of gear is my macbook pro running logic studio 9. the one thing i can’t do without on the road is my mini cooking setup (i prefer traveling by van rather than flying). it’s hard to stay strong eating road food so i bring a hot plate & basic supplies so i can cook some decent (if simple) food in my room.

The Secret to Getting More Gigs