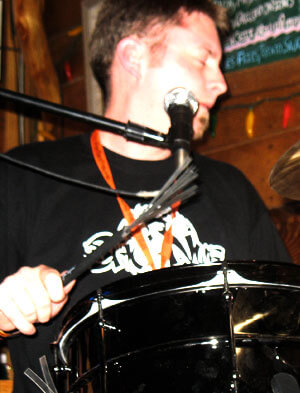 No, that isn’t my favorite drum rudiment. It’s the sound of my knees and back as I get out of bed on a far too frequent, number of times. I’ve been playing drums over 33 years and have realized that what used to be a fairly routine practice or gig has started to take its toll on the old body. Aches and groans after a pretty intense practice seem to signal the coming of old age and the inevitable ‘old man dance band’ gig. How I long for the days of 2 hours of solo snare work followed by full orchestral practices while then racing to the local dive bar to perform with my ultra complex, “I’ll never play in 4/4 again”, prog-rock band to a crowd of 4 (ok, I lied crowd of 2). Actually, no. I don’t miss it. But glad I went through it.

Like everything else in life with old age comes the bodies inability to recover as well as it used to. Especially, when I think that no prep work is needed to keep me running at peak performance. At 41 I still have a want and need to push myself creatively while continuing to keep my abilities and technique at or above where is was at 21. So that means lots of prep work to keep my body running as well as it can and still have the ability to grow. I’ve taken steps to keep myself in drumming shape and I’ve found it helps with keeping life and it’s insanity at a much more palatable level as well. I also have a six year old and a 2 year old. So if I don’t stay in some sort of shape I’ll be in the ICU at 42 (just from visits to the playground).

Here’s quick list of the things I found that make a huge difference.  This is by NO means a definitive list of what you can do. It’s just what’s helped these old bones and joints. I do them as much as is humanly possible in my life and as much as is needed to keep me gigging and practicing as much as I can. The only people who care if you work out every day are the people who are obsessed with working out. And, they are horrible people. No one wants to hang out with them.

That’s what I do. Hopefully it helps. I know it does for me, and I’m positive I could be doing a lot more. What do you do? What has helped? What has hurt? From kazoo to guitar to drum the older we get the more we have to stay in shape to play at our ‘A’ game. Join the conversation at our Head Above Music Facebook group and let us know what you do stay at your best!