COVENHOVEN –  RECORDING A RECORD ON YOUR OWN
By Joel Van Horne

About 6 months ago, I began working on a new record – writing, performing, producing, and recording the entire thing alone in my apartment.  I imposed no outside pressures or deadlines on myself for the first time ever.  I knew it would be a challenge and I also knew that ultimately what I came up with could quite possibly be only ‘demo’ quality and that the real tracking of the record would begin once I came to that realization.  But happily, I am pleased with how things have turned out thus far and am now in the mixing and mastering stages.  All along I knew that I needed to work with an engineer for mixing, to get a fresh set of ears on everything, to gain a new perspective myself, and to get an expert’s opinion on the quality of my rough tracks.

At this point, I have no idea exactly how many hours I have spent tracking, but a safe estimate would be around 10 hours per song, so over 100 hours would have been spent in the studio, which if I went with a cheaper studio, I would’ve been spending around $50 an hour.  So, I’ve saved at least $5,000 by tracking in my home studio.  Not to mention the absence of pressure and the problems that can arise with scheduling… (i.e. let’s say you have a day scheduled for vocals and you show up to find out that your voice just isn’t working that day for whatever reason… so you lose that time and money… this has happened to me). 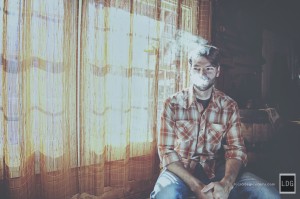 It should be said that I have spent hundreds, if not thousands of hours in studios over the years, working with many very talented and knowledgeable audio engineers up to this point.  I have paid close attention to their practices, and learned from those experiences.  This is why I now feel comfortable going it alone.  I now understand that when it comes to tracking, the source (i.e. your voice, your instrument, etc.) and the performance itself are the two most important things in making a good recording.  The mics, preamps, A-to-D converters, and software, while obviously important, all come second to these two things.

To raise the money for mixing and mastering, I knew I had 2 options.  I could either sock away whatever I could afford each month and in a year or so I’d have enough to cover the cost, or I could try a Kickstarter.com campaign to raise the money in 30 days, and in doing so, provide a cool way to involve my backers in a deeper way with the whole process.  I took the risk (Kickstarter is “all-or-nothing”) despite my reservations, and am now 130% funded with a few days left, and the buzz and awareness surrounding the project because of the Kickstarter campaign is an added bonus.

Final thought:  I was once told that “good records are made up of good songs, not good sounding songs.”  This couldn’t be more true.  It’s important to get the sounds you want and to produce the record in a meaningful and thoughtful way, but none of that means anything if you aren’t starting with great songs.

Joel Van Horne plays all the instruments. The lead singer and multi-instrumentalist of Colorado’s Carbon Choir begins a new journey with his first solo, self titled album, Covenhoven.