Build Your City
By Alabaster 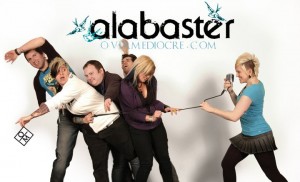 Alabaster, the Seattle based band is just finishing up in the studio after recording a new record with Producer Joel Casey Jones who has recently worked with bands like: Girl On Fire, To Paint the Sky, Avery Davis, Anchor the Tide, and Phantoms. ref: http://www.myspace.com/joelcaseyjones . The Album is looking to be released in late 2011 or Early 2012. They are also shooting to get on warped tour this year for the Northwest stops again with either Skatera, Keep a Breast dot Org, and/or the Girlz Garage. If that doesn’t work out ideally they will play at the DIY tent or a slot on the Kevin Says Stage.

What we like about the Head Above music site is it’s like having your own manager, adviser, coordinator, organizer, and motivator! It’s inspiring to see such a website that gives back to the community especially in a community that is so “Dog eats Dog”. We stand by you in these ideals in our home city of Seattle, and try and support bands the best we can by spreading the word, staying positive, and just loving the shit out people who share the same insane passion we do. The mission and goals we set out for ourselves in Alabaster is to: have fun while creating great music, with deep lyrics, a melody which takes no mercy, a stage show of rocking people’s faces off, and loving every minute of it.

Our advice to readers would be to own your own city first before hitting the road on long tours before the “fan base” is there. These types of tours can prove to be not only grueling on the band’s finances but also on the internal relationships. This to us personally, isn’t worth it, because we really are all best friends.  Without that trust, and respect for each other the music suffers and that shows not only in the song writing but in the live performance.

I *(Kate-Lead Guitarist) can remember coming out with our first EP in 2006 and getting right on the road to promote it and I cannot tell you how many times we played for just the other bands!  Hell one night in Provo Utah, the main venue, “the stary night” wasn’t even open when we all showed up to play. So we went down the street and some record shop let us play, which was cool… But we only ended up playing to the freakin sound guy and the janitor cleaning up the place because all the other bands and their peeps left the venue after they played. You can only imagine what this does to a band’s morale…

Regardless we think touring is great but you have to build up positive relationships with other bands in that region to ensure you will have a support network ready to work towards a united dream together.  Plus, often times if you know someone in the area you can crash on their floor instead of in the van! Ultimately you have to start somewhere and sometime. That’s just how the first tour is but with the power of social networking, (*which is a must) you could have plenty of other musicians if not friends ready to welcome you with open arms into any city across the world. Especially if you’re nice and cool, that goes a long way in this business; if you’re a douche bag, well, people talk and that gets around, quick.

Currently in Alabaster we focus on creating great music, lyrics based on real experiences, destroying our region and truly loving every second of it. We’re going this route before shelling out the hard cash on a van, gas, and what-have-you to play for 2 people in some bar in Provo, Utah. As a DIY band, you’ve got to keep the local music community strong by supporting each other.

1. One book you would recommend

Tweak by Nick Sheff, keeps me in check when I think about using drugs or drinking again…

2. Your favorite piece of gear

mixed with My Schecter C1 + Guitar

3. one thing you can’t live on the road without

my cell phone obviously, the official version of the adult blankey… actually coffee probably takes the cake on that one…

4. who are you listening to now

I have a sweet mix tape on of : I am Abomination, Anchor the Tide, Face to Face, and Bayside.