written by Head Above Music December 3, 2012 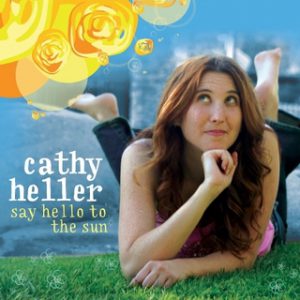 Born on Long Island, to a piano teacher and a psychologist, Cathy Heller has always had a love for music and an insight and compassion well beyond her years. Singing since the age of 2, Cathy, always dreamed of one day writing music that would be a part of TV and Film soundtracks. What began with her first song in a Kodak commercial, has led to numerous placements of her music on some of her favorite TV shows, ads and films. Her very memorable song Turn the Sunshine On was on NBC for a while and is still running on American Airlines. Fulfilling another childhood dream, Cathy, is having a blast working with The Jim Henson Company on her own music-driven series.

We caught up with Cathy Heller after finding out about her song “We’re Good Together” was picked up as Hasbro’s theme song for the new board game from Words with Friends!

Can you take a moment to speak about co-writing? Was it hard to let others in on the process when it came to working on unfinished ideas; or was it something you easily leaned into because you worked with close friends like Kyler England.

“I feel really blessed because the few people I co-write with I really connect to and that enhances the writing process so much. I feel like my co-writers help me fine tune ideas and it’s always a more enjoyable, more successful process for me when I have someone to bounce ideas off of. Finding a good co-writer is like finding someone you really want to date, there has to be a certain chemistry and a speaking of the same language. I feel so lucky to have found it and I recommend co-writing to other writers cause it gets you outside of yourself and brings more dimension to the work.”
How did you first get into Licensing? Can you talk about the process of getting picked by Kodak?

“At first I was signed to a fantastic guy, Marty Silverstone, who was representing my music and he pitched the songs to Kodak and the other film and tv spots. I then started pitching things myself. I really enjoy that side of things, almost as much as the creative side. It’s fun to connect with music supervisors and find songs that fit what they’re looking for.”

What advice do you have for musicians who have an expansive catalog and want to explore licensing?

“There are a number of solid companies as well as individuals who represent music for purely licensing purposes. They don’t take publishing, but rather only a commission for licenses they procure for you. The key is finding someone who not only has great relationships with music supervisors, but who also is really gung-ho about your music, since they have to be excited enough about it to get others psyched about it. Some people do not like the idea of pitching their own material, so having someone to do it for them feels much more comfortable. It can be more lucrative if the person pitching has better relationships then you do and they’re making sure all their contacts know about you. If you can’t find this, you can pitch your own material. It’s a matter of doing a little homework and thinking about which shows utilize music like your own and then connecting with those music supervisors. They don’t like mp3s, so it’s best to send links and it’s important to really do your homework and send music to those who really have a use for what you’re sending. Someone once told me “Polite Persistence always pays off” I agree with this.”

“My main focus is writing songs that mean a lot to me and then licensing them. I don’t focus too much on touring because I love the writing and recording process so much and also because I have a one year old and I don’t want to be away from her too much. So I write a song or two a week and spend a lot of time in the studio. In the last year alone I’ve recorded about 26 songs. So much fun!”

Where do you find your inspiration and focus to keep your goal of writing a song or two a week? This may come easy to you but not for others.

“I keep up my writing easier when I take the pressure off. I make it about having fun and not worrying about it being perfect. Then I can just be in the process and write. Sometimes you surprise yourself and great stuff happens. I think nowadays everyone is so worried with making a hit so our songs are actually getting too complicated. When you think about some of the greatest songs of all time, they are simple, straight forward and accessible. I think it’s easier to write this way when you’re writing all the time without being so critical. Just enjoying the process and seeing what comes. When you were a kid you would fingerprint not because you wanted your mom to frame it and put it on the fridge, but because you liked doing it and getting your hands dirty. We have to remember how to play. Great things happen when we do.”

How did working with Bill Lefler affect your style on “We’re Good Together”?

“Bill Lefler is so talented and I feel so lucky to work with him. He brings so much to the process and finished product. On We’re Good Together just like on so many other things he produces he ups the game right at the outset by laying down such a unique, powerful percussion bed of tracks. He plays shakers, tambourines, adds stomps and claps all with his own flare and it right away gives the track an indie-quirky vibe all it’s own. On We’re Good Together he also spiced up the uke part as well as the background vox. He’s the best!”

Head Above Music is about inspiring other musicians to value the journey they are on as musicians. Please tell us about your workshops to inspire children to write songs and find their own voice at such a young age.

“I feel like the thing I do more than anything when it comes to other people is encouraging them to do what they love. I just think everybody is given unique talents and quite often when we’re doing them we’re the happiest versions of ourselves and we in turn make the world a happier place, so I love inspiring others to do what they love and especially sharing that with kids. I’ve led a few songwriting workshops with the younger ones and it’s so much fun. They’re really good at it and they don’t even know it.”
What is one thing you can’t live on the road without?

“My baby, which is probably why I perform mostly in town :)”
What is your favorite piece of gear?

“My Kohala, Uke. It’s light and it adds character to a song unlike guitar, it is unassuming and charming.”

Whose music are you listening to these days?

“The Stolen Jars, Ingrid Michaelson, Florence and The Machine and my own as I prepare to launch my new record. January 2013!!! woot!!”