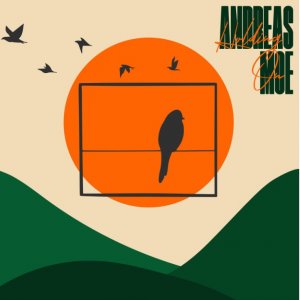 STOCKHOLM, SWEDEN (January 22, 2021) – Critically acclaimed Swedish artist Andreas Moe begins the New Year – and decade – with hope for change in his brand new single “Holding On”, released on January 22nd. Featured in American Songwriter, the track is the first song from his highly anticipated EP releasing in the spring of 2021.

“ ‘Holding On’ is a song that’s slowly been writing itself over several years,” reveals Moe. “I’ve had the chorus recorded on my phone for over three years. To not only be able to complete it, but also finally release it as a single is such a satisfying feeling, as from all my previously released songs, this is the one I’m most proud of.” With the song’s message of breaking free and letting go, Andreas Moe wants to convey a sense of hope to the listener. “For me, ‘Holding On’ is a very hopeful song about breaking free from the things we know are not good for us, which hold us down and stop us from growing – ‘..one of these days I will burn every page and tell a story that is only mine,” he explains.

Listen on your Favorite Platform

“Holding On” follows the November 2020 release of “POWER” – Andreas Moe’s interpretation of the Kanye West hit – and provides listeners with a taste of what is to come on his 2021 EP. As a five-time Platinum-certified songwriter, Moe has worked with artists around the world such as Avicii, John De Sohn, Tiesto, Cheat Codes, Omi & Sabrina Carpenter. Having opened for artists like Gabrielle Aplin, Kodaline and for John Mayer during The Search For Everything Tour performing at the famed O2 Arena in London and the Stockholm Globe Arena, Moe is an experienced performer – garnering millions of fans worldwide. In December 2019, Andreas Moe was invited to perform at the Avicii tribute concert in Stockholm alongside international stars including Rita Ora, David Guetta & Kygo in front of a 60,000 strong audience.

Andreas Moe boasts over half a million Spotify listeners with several of his singles charting over 10 million streams. Moe’s discography includes multiple chart-topping EPs (UK singer/songwriter charts) and several collaborations including a featured vocalist spot on Avicii’s single “Fade Into Darkness”. As a songwriter, Moe’s songwriting credits can be found on the Platinum selling albums of international artists such as Cheat Codes, Sabrina Carpenter, Tiesto, Tinie Tempah, Omi, Boyzone. His songs have been featured on American Idol, with 3 finalists choosing to sing his tracks on the show, the latest winning single on the Voice of USA December 2020 is a song called “Up From Here” written by Andreas, and Universal Pictures featured 4 of his tracks in their 2012 film The Knot. As one of Europe’s emergent leading songwriters, Moe is constantly working with some of the industry’s biggest names including Corey Sanders (Zedd / Katy Perry / Sigala / James Arthur), Jake Gosling, Brit nominated producer (Ed Sheeran / One Direction / Demi Lovato) and Ishi (Tinie Tempah “Written In The Stars”).

What is one message you would give to your fans?

What’s important to me is that my strive towards always being real and trustworthy comes across and translates in my music. And also that I’m not taking anything for granted and are thankful for every second I get to have this job.

Who are you listening to these days?

I just found a new artist from Sweden called ’Sarah Klang’. Her voice is so captivating and the songwriting is just incredible, listen to ’New Day Coming’ and you’l get what I mean. ’Flyte’ is also amazing, their song ’White Roses’ is probably my favourite song at the moment. Joni Mitchell, she’s my hero.

What is your favorite gear and why?

Right now I’m so in love with my BAE 1073MP preamp! Just makes everything sound so warm and nice! I also LOVE my E-bow for creating those really emotional guitar-pads. The thing I use the most would probably be my PolyTune clip on tuner though, so convenient and slick.

Before venues shut down or even know before your live streams, what is your pre-show ritual?

hm, I’m probably not the most fun to hang with just before a show. I worry a lot and I think it’s fair to say that most of my pre show ritual is about calming myself down, haha!

What do you love about your favorite music venue?

Tough question since every venue has it’s own charm. I really love playing living rooms and small smokey venues, but then again, Ericson Globe Arena in Stockholm was also pretty damn cool ^^. But if I had to pick one I’d have to say KOKO in Camden Town, London, such a cool venue.

How has COVID-19 affected you, your band, your community?

I almost feel guilty saying that for me, it hasn’t been that bad. Obviously, I had many concerts and fun things cancelled but it’s also given me time to focus on my album. During isolation, there was literally nothing else to do than write and produce these upcoming songs, and for that I’m grateful. Since the initial plan to record everything in a professional studio with a great producer was foiled I had to do it myself – and it has made me grow in so many ways!