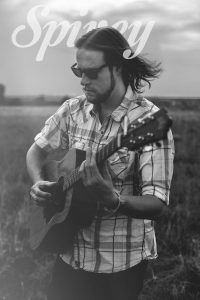 SPiVEY is the long running project of Ryan Spivey out of Lubbock Texas. His newest EP is entitled, “Chief’s Hideout”, was released the end of 2016 and I feel is his most accomplished work to date.

As I was writing this article I jumped in the WABAC Machine and had the crazy realization that I first met Ryan in 2009. Even then I was amazed at what an amazing musician, songwriter and generally cool guy is he was (cool enough to have such a cool last name he could name his cool band after it). I’ve always felt Ryan wrote songs that felt very familiar, but sounded completely brand new. It could be he just writes such good music you can’t help but feel that you’ve heard it before. That is until you are about half way through the first song and realize you are listening to something truly unique. His style keeps your interest peaked through the first listen and propels it through the many, many listens after. 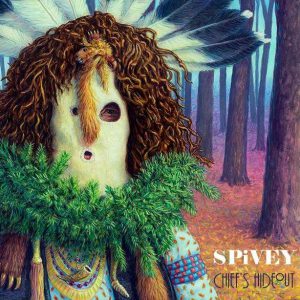 “Chief’s Hideout” is no exception to this rule. At first listen you a whisked away through 5 well crafted, brilliantly produced and super catchy songs. All subsequent listens expose you to just how much is going on with this EP. The depth and craftsmanship that was put into this EP becomes evident with each listen you reward yourself with. For me it’s still showing new layers.

For those of you not familiar with SPiVEY the only comparison I have is: Folk Implosion, Beck, Massive Attack, and Ryan Adams sitting at a bar on the dark side of Mars’ Bonneville crater, drinking grain alcohol and conjuring the spirits of the Highwaymen through a Minimoog Model D.

Ryan was nice enough to let me pick his brain and find out just where and how all this came to be.

1. You have a such a unique sound. When I saw you early on it was just acoustic guitar and you. There is so much going on in conjunction with that now. How did you structure you song writing and instrumentation for “Chief’s Hideout”?

All the songs were written already, at their core, I had basically what I do live with them worked out more or less the rhythm guitar, drum machine, and voice. Getting to throw multiple vocal harmonies, keys, guitars, and other weird stuff on top, is where the fun starts to happen. The whole record was done in 4.5 days. So we didn’t have a ton of time to goof around with any weird recording luxuries

2. You recorded this whole EP in 4 days up at a family cabin in CO. How much was written and ready to go before you got there? Or did you let inspiration strike and let your surroundings influence where you headed?

I definitely let inspiration do it’s thing after the root of the songs were done. If things weren’t working, we didn’t get bogged down. On to the next thing. We put in anywhere from 10-14 hr days getting it wrapped up. I can’t lie. It was amazing recording and staying all in the same place. My brother, who came up to film the process and I drove up to Colorado with all the gear and my buddy and his wife flew up the next day. With today’s technology, you don’t have to spend thousand’s on making a record you are unhappy with and spend way too much time and dough on. Make it yourself, until someone else is footing the bill.

3. We are here for gear! Give us the lowdown on what you used, gear wise, on the new EP and why.

4. Did you run into any issues while holed up at the cabin? Were there any roadblocks you ran into? How did you move past these and keep the momentum rolling?

We never really ran in to any problems recording out there. Thank god because, we were a good 30-45 from Durango, the nearest town. Dave Wilkinson, my longtime friend, fellow, musician, engineer/producer was really good at keeping things going. If something wasn’t working we didn’t get too bummed out and moved on to something else.

5. How much of the albums electronic sound do you incorporate into your live show? And how?

I incorporate as much as one man can-LOL! I don’t use any computers. Just old school analog gear. Live, I just use drum machines, my microKorg, acoustic guitar, and voice. Some tracks have bass lines I’ve made, some don’t. I also incorporate start stop pedals and other guitar fx pedals.

6. Where did your sound evolve from? What influences lead you to create your “signature” sound.

Well my sound came from a lot of people. I picked up the guitar because of Jimmy Page at 18, I wrote songs because of Bob Dylan, and combined the two because of Ian Moore. i love and am Influenced by so so many styles and types of music. Not just western music. A little of everything. My ex band mate was a big influence on me and the electronic aspect of things. He was a whiz with drum machines and synths. I learned a lot from him. I really like just incorporating all types of things and styles in to the process.There really are NO rules in music

7. How important is the visual side of your albums and promotion? I seriously love the cover for Chief’s Hideout and have always said you have the best posters out there.

The visual side of things is a HUUUUGE thing for me. I love bands that put a focus on that. There’s no mystique anymore with the web. You definitely weren’t going to be seeing me on the cover posing. Plus there’s just more interesting things to see than me cheesing it up. Thank you about the artwork! I had a friend of mine and amazing artist, James W. Johnson, paint the cover.There’s this cool, creepy weird thing going on that I love. He nailed it for me!

8. Give me 5 bands that are peaking your interest now.

9. If you could go back 10 years and tell yourself anything what would it be?

Hmmmmmmm, I know this sounds cliche…but don’t take life so serious! We really shouldn’t. Our time here is way too brief.