Not bad. But it seems like a lot of the stuff you already know. I mean, if you’re planning your tour around other big bands, how the heck are you supposed to tour? Those bands are going crazy in the summer time and that’s your prime time except for college markets. I don’t know, there’sa lot to consider when it comes to that stuff. I’ve learned that, these days, in the hard economy, you can bank on the folks who can’t afford 80bucks for a ticket to spend 10 on you if you put on a good show. That’s all theory though. I mean, I toured a little for a couple of years and did just fine playing smaller venues who didn’t know who the heck I was. Places that look for no-namers, you know? Such a weird time we live in. Do you really think that the theories from the 80’s and 90’s still apply today? I don’t think they do. Bands were making the same amount then as they do now. Not much has changed. Oooh, call me a pessimist.

This was my response:

I think that you can always learn from those who came before you. Some fundamentals of touring, such as putting in as much effort to promote, advertise, market, and be human as you do to learn and play your instrument isn’t going to hurt you. 80s-90s did not have the technology that we do today. That’s why so many bands get over looked, the market is saturated. Take the time to be a people person and use some of the tools from the 80-90s, you’ll set yourself aside from the clutter; you’re real, not just another download or mp3. I’ve toured for 6-8 months out of the year from 2003 – 2008 I’ve played 48 states and have buried two cars. I’m sure if I knew what they knew and used my judgment to use and bend that information accordingly, I would’ve been a little further along. I can relate to almost all 61 points in that article.

What are your thoughts on the book and the conversation above? 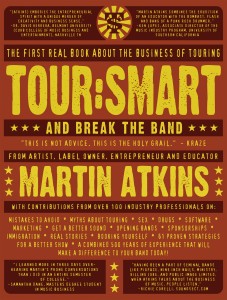