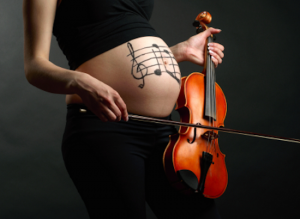 I read a phenomenal book last year that is fascinating from both a musical and a scientific perspective.  The author, Daniel J. Levitin, is a cognitive psychologist, neuroscientist, record producer, writer, and musician.  He looks at music from a musical perspective as well as a physical and psychological one, studying the effects of music on our brain, from emotion to motor skills, from memory to speech, from biology to environment.  He’s worked with everyone from Steely Dan, Stevie Wonder, Blue Öyster Cult, Chris Isaac, Santana, and the Grateful Dead, to Francis Crick (co-discoverer of DNA).  He’s studied at MIT, Berklee School of Music, Stanford, University of Oregon (where he got his M.Sc. and Ph.D.), as well as doing post-doctoral work in Silicon Valley’s Interval Research, Stanford University Medical School, and UC Berkeley.  He’s contributed comedy material for the comic strip Bizarro, Jay Leno, Arsenio Hall, performed at the 1984 DNC with Robin Williams, and placed second in a National Lampoon stand-up competition.  Talk about your over-achiever!

This is Your Brain on Music: The Science of a Human Obsession (2006) is filled with information about how music affects our sociology, psychology, anatomy (it actually changes our brain composition), memory, and more.  It appeared on the New York Times Bestseller List in both paperback and hardcover.  While it’s overwhelmingly technical in some regards, especially to non-musicians (even with a BA in Music, I had to do a mental refresher of theory and technical terms), its section on musical preference gets down to a simple fact: From the time we’re in our mothers’ wombs, we’re storing memories and creating preferences that can affect us for the rest of our lives.  A fascinating study confirmed that what children hear in the womb is not only heard, but actually remembered. The startling conclusions of the study (and many others Levitin has done or written about) have blown our understanding of the mind’s capabilities wide open.  Prior to such studies, it was questioned as to what, if anything, was remembered from the womb.  After the study, scientists were amazed to find that in the womb we actually store details as specific as the music our mothers listen to as long-term memories.

The following excerpt is from Chapter 8: My Favorite Things.

You wake from a deep sleep and open your eyes.  It’s dark.  The distant regular beating at the periphery of your hearing is still there.  You rub your eyes with your hands, but you can’t make out any shapes or forms.  […] Then you hear a different but recognizable sound—an amorphous, moving, wiggly sound with a fast beating, a pounding that you can feel in your feet.  The sounds start and stop without definition.  […]  These familiar sounds are comforting, you’ve heard them before.  As you listen, you have a vague notion of what will come next, and it does, even as the sounds remain remote and muddled, as though you’re listening underwater.

Inside the womb, surrounded by amniotic fluid, the fetus hears sounds.  It hears the heartbeat of its mother, at times speeding up, at other times slowing down.  And the fetus hears music, as was recently discovered by Alexandra Lamont of Keele University in the UK.  She found that, a year after they are born, children recognize and prefer the music they were exposed to in the womb.  The auditory system of the fetus is fully functional about twenty weeks after conception.  In Lamont’s experiment, mothers played a single piece of music to their babies repeatedly during the final three months of gestation.  Of course, the babies were also hearing—through the waterlike filtering of the amniotic fluid in the womb—all of the sounds of their mothers’ daily life, including other music, conversations, and environmental noises.  But one particular piece was singled out for each baby to hear on a regular basis.  The singled-out pieces included classical […], Top 40 […], reggae […] and world beat […].  After birth, the mothers were not allowed to play the experimental song to their infants.  Then, one year later, Lamont played the babies the music that they had heard in the womb, along with another piece of music chosen to be matched for style and tempo.  […] Lamont then determined which one the babies preferred.

How do you know which of two stimuli a preverbal infant prefers?  Most infant researchers use a technique known as the conditioned head-turning procedure […].  Two loudspeakers are set up in a laboratory and the infant is placed (usually in his mother’s lap) between the speakers.  When the infant looks at one speaker, it starts to play music […], and when he looks at the other speaker, it starts to play different music […].  The infant quickly learns that he can control what is playing by where he is looking; he learns, that is, that the conditions of the experiment are under his control.  The experimenters make sure that they counterbalance (randomize) the location that the different stimuli come from; that is, half the time the stimulus under study comes from one speaker and half the time it comes from the other.  When Lamont did this with the infants in her study, she found that they tended to look longer at the speaker that was playing music they had heard in the womb than at the speaker that was playing the novel music, confirming that they preferred the music to which they had the prenatal exposure.  A control group of one-year-olds who had not heard any of the music before showed no preference, confirming that there was nothing about the music itself that caused these results.

[…] It appears that for music, even prenatal experience is encoded in memory, and can be accessed in the absence of language or explicit awareness of memory.

[…] Lamont’s results are important because they show that the prenatal and newborn brain are able to store memories and retrieve them over long periods of time.  More practically, the results indicate that the environment—even when mediated by amniotic fluid and by the womb—can affect a child’s development and preferences.  So the seeds of musical preference are sown in the womb […].

Tone Starts With Your Strings